Ennio Morricone revolutionised cinema music but has never won an Oscar for one of his scores. He’s up again, for ‘The Hateful Eight’. Does he care? Just a little 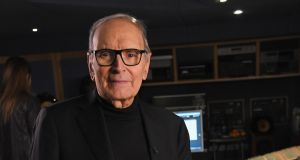 Ennio Morricone at the Abbey Road studios, in London, to record the score for ‘The Hateful Eight’. Photograph: Kevin Mazur/Getty Images for Universal Music 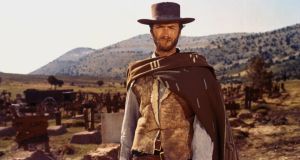 Clint Eastwood in ‘The Good, the Bad and the Ugly’, a serious contender for the best soundtrack of all time 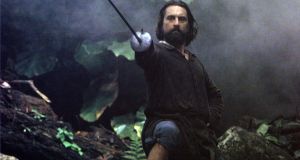 Robert De Niro in ‘The Mission’, which was beaten to the soundtrack Oscar by the rearranged jazz standards of ‘Round Midnight’ 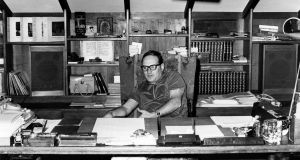 Ennio Morricone in his office in Rome in the 1970s. Photograph: Mondadori Portfolio/Getty Images 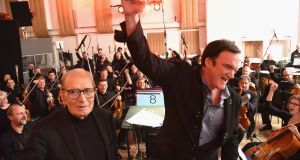 Ennio Morricone is a member of a club to which no film professional wishes to belong. Like Alfred Hitchcock, Cary Grant and Peter O’Toole, the singular Italian composer has somehow contrived never to win a competitive Oscar. His failure may be the most outrageous. For all John Williams’s surging fanfares and Bernard Hermann’s romantic sweep, neither man managed to reinvent how film music works. The tracks Morricone put together for Sergio Leone’s great westerns – a complementary mix of hard edges and sweet melodies – sounded like nothing else in contemporaneous cinema. He secured five Oscar nominations but, though he received an honorary award in 2007, never won one in open competition.

Never say die. This year his work on Quentin Tarantino’s The Hateful Eight has made him favourite with the bookies. Might he finally be on the brink of triumph? Oh, he probably doesn’t care any more.

Speaking through an interpreter, the maestro, now a lively if craggy 87, isn’t exactly laughing when he says this. You get the impression that he still cares quite a bit. I have read that he was particularly annoyed when his score for The Mission lost to Herbie Hancock’s for Round Midnight, in 1986.

Dark clouds gather around him. “This is true,” he rumbles. “The audience in the theatre shouted when it was announced. They were also disappointed. Herbie Hancock had only 50 per cent original music for the film. The rest was made up of songs arranged by Herbie. It was not fair. Herbie is a great pianist and arranger, but the music was not 100 per cent original. I left the room immediately. I was very cross. The audience kept on shouting.”

He stops me in the middle of my next question. There is equivocal muttering. “Maestro would like to ask you a question,” the interpreter says ominously. “What is better: an Oscar for your career or one for a particular film?”

I don’t know what the right answer is. Is Morricone angry at not getting a competitive Oscar or does he regard the honorary award as the supreme accolade? I babble something about how Hitchcock was grateful to get his honorary statuette but would surely have liked to “win the lovely bugger outright” (as Peter O’Toole remarked grumpily when offered the consolation gong).

“For a director that might be important,” Morricone says. “But there is sometimes a feeling that, if a film is on a roll, it will pick up awards it doesn’t deserve – like music. I felt the honorary award did recognise my music’s importance to cinema.”

I seem to have got away with that.

On St Valentine’s Day Morricone will be at 3Arena in Dublin to conduct a concert celebrating his 60 years of composing music. Where will he begin? His work on Leone’s films alone could accommodate a month-long season: A Fistful of Dollars, Once Upon a Time in the West, Once Upon a Time in America, Duck, You Sucker! Then there was the work with Brian De Palma on The Untouchables and Casualties of War. He composed for masters such as Dario Argento and Pier Paolo Pasolini. How does he select what to play at such a gig?

“There are so many hours of music that it is hard to make a choice for just two hours. It is a mix of my favourite pieces and my audience’s favourites. I always have something new, but I always have what the audience expects to hear as well.”

Do I get a sense that certain greatest hits exhaust him? He surely can’t leave the podium without including a few whip cracks and wild cries from Leone’s The Good, the Bad and the Ugly.

“I am not sick of playing again and again the same music. But I do like to move on. You can make the selection you like, but you cannot leave out Sergio Leone and The Mission by Roland Joffé. There’s just no way to leave those out. Even though sometimes I might be willing to play something else.”

This is not how life was supposed to play out for Ennio Morricone. The son of a musician, he studied trumpet at the National Academy of Santa Cecilia, in Rome, with a mind to becoming a composer for the concert hall. He played in a jazz band and started arranging music for pop acts. From 1964 Morricone was part of the still influential experimental collective Gruppo di Improvvisazione di Nuova Consonanza. If things had gone differently he could have become Italy’s John Adams. “Film work came organically. That really wasn’t my plan. It just happened.”

By the time he came to work on Leone’s A Fistful of Dollars, in 1964, Leone was already established in his home country, but that extraordinary soundtrack caught the world’s attention and launched one of the most vital partnerships in cinema. Leone’s films are inconceivable without Morricone’s bizarre, beautiful, sometimes overpoweringly sweet music. Why did the two work so well together?

“It helped that the films themselves were very successful,” he says. “Secondly, Sergio was very good at getting the right scene for the right music. Thirdly, the audience could actually hear the music. This is not always the case. He would include the whole duration and would play it at volume. He would lower other sounds so you could hear it.”

What more could a composer ask for?

So which directors did he not get on with? There must be somebody he’s prepared to dis. “I don’t remember one in particular,” he says, diplomatically. “But some directors are jealous of the success of the music. If an audience member congratulates him for the film and says the music was great they will be disappointed. They will think the music is taking over the film. Just some directors think that.”

Nobody else sounds like Morricone. Over those 60 years he has influenced hundreds of composers, but none has duplicated his blend of the easily whistled melody and the avant-garde crunch. I wonder if he knew he was breaking new ground when he introduced those awkward found sounds to the soundtrack for A Fistful of Dollars.

“No, not at all. I didn’t know I was doing anything new or revolutionary. Though I do try and give the director something new each time. I hope it will be unique, but I never expect it to be revolutionary.”

Morricone swells with confidence and authority. Nothing about his demeanour suggests that he is gearing up for retirement. A win at the Oscars will surely only further fire his undiminished vigour.

Let us hope he fails to honour his promise one more time.

The good, the great and the beautiful: Five classic Ennio Morricone scores

THE BATTLE OF ALGIERS (1966)
Gillo Pontecorvo’s study of the war against French colonial rule is so raw and urgent it takes on the quality of documentary. The music is typically complex, but what sticks in the brain is that insistent four-note tattoo.

THE GOOD, THE BAD AND THE UGLY (1966)
A serious contender for the best soundtrack of all time, Morricone’s theme for Sergio Leone’s epic western, starring Clint Eastwood had no obvious predecessors. The main refrain is now an unavoidable ringtone.

ONCE UPON A TIME IN THE WEST (1968)
Particularly notable for the four leitmotifs that represent the characters squabbling over an emerging town in the old west. Evil Frank’s clangs. Brave Jill’s sweeps romantically. Cheyenne’s is jaunty. Harmonica’s is played on a harmonica.

THE THING (1982)
Morricone is great at the big, complex orchestrations. He is also the master of cold simplicity. Nothing illustrates the latter talent better than the throbbing bassline beneath John Carpenter’s classic horror films. Apparently, the director didn’t like it much.

THE MISSION (1986)
In the film starring Robert De Niro and Jeremy Irons, we hear the symphonic Morricone in action. Gabriel’s Oboe, one of his sweetest melodies, has become an unavoidable standard. Inexplicably beaten to the Oscar by Round Midnight’s rearranged jazz standards.

‘Conor McGregor is an inspiration. There’s a severe vulnerability to him’
6