Terry Gilliam: I disagree with John Cleese on Brexit 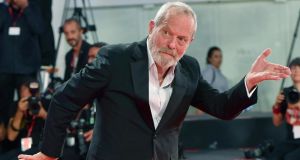 Terry Gilliam has said he disagrees with the way his friend and fellow Monty Python member John Cleese sees the world, following comments from the latter endorsing Brexit and criticising the diversity of London.

The animator and Hollywood director despairs of Donald Trump and Brexit, both of which make him “terminally depressed”. Cleese has previously voiced his support for the UK leaving the EU, and for saying that London was no longer an English city.

Gilliam told Radio Times that the only public figure he can trust in the current political climate is David Attenborough. He also criticised the political correctness of contemporary comedy, but stopped short of supporting his friend’s view of the world.

He said: “I’m the instinctive, monosyllabic American and he’s the tall, very suave one. I love John enormously but I just disagree with the way he perceives the world.”

Gilliam said that his friend, no matter his views, had always been funny. “John has never changed, he’s just got fat, that’s all.”

The director, who achieved critical recognition for his work on Brazil, Time Bandits, and 12 Monkeys, does not approve of controls on comedy and has criticised attempts to diversify writing rooms and police the material of comedians.

He said: “It doesn’t have anything to do with gender, sex or anything. Good writing is what it’s about, and that’s why you hire people, not because they’re this colour or that gender. ‘Is it funny?’ is the only thing that should be asked. Comedians are treading carefully and this is terrible.”

The director, who renounced his US citizenship, said that although the comedians in Monty Python had an Oxbridge background, their material pushed diversity, and attacked the established order.

Cleese made similar comments this year at a conference in Dublin, saying that the “dreadful era of political correctness and fear of offending people” is “taking all the fun” out of life. – PA