Review: Performances elevate an old familiar tune that gets a little stranded between genres 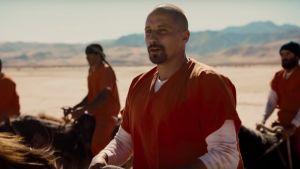 Matthias Schoenaerts chews the scenery as Roman Coleman in The Mustang

There is no reason to sniff at a film that sings the old familiar tunes in a strong, confident voice. Boasting Robert Redford as executive producer (and you’d know it), The Mustang is a film about a rough diamond who gains some polish when asked to care for a needy animal. It’s a prison movie. It’s a horsey movie. The expected beats are struck with such commitment that it proves hard to resist.

We learn early that the film will play it on the nose when Roman Coleman (Matthias Schoenaerts), serving time for a violent crime, happens upon a mustang kicking furiously in a small compound. Why, it’s almost as if prisoner and horse have something in common. Roman is accepted into a programme that encourages prisoners to train the wild horses for later auction. Meanwhile, he tries to mend fences with a daughter who has every reason to hate him.

The performances are excellent throughout. Schoenaerts could not seem less Belgian as an angry man more unwilling to forgive himself than are those he has hurt. He gets a big, cathartic scene towards the close and the actor chews it into matchwood. One suspects that the battered old pro who runs the scheme was described in the script as a “Bruce Dern type” and that actor has turned out to do his duty by the role.

There is thus much to enjoy. But The Mustang feels a little stranded between genres. There is something of an inspirational Disney tug about it, but, granted a 15A cert here, it is too rough and violent for younger children. The ambience of outer Nevada is conveyed well, but the picture has nothing like the grit and nuance of Chloé Zhao’s superficially similar The Rider.

None of which is to suggest that viewers with hearts in their chests won’t fret when the horse is in danger and cheer when he overcomes the latest obstacle. The old familiar tunes have the best and most rousing choruses.