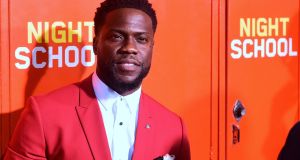 Actor-comedian Kevin Hart and two others were involved in a car crash in Calabasas, California on September 1st. Photograph: Frederic J. Brown/AFP/Getty Images

The actor and comedian Kevin Hart has been injured in the crash of a vintage car in the hills above Malibu.

A California Highway Patrol collision report said the 40-year-old Hart was a passenger in a 1970 Plymouth Barracuda that went off Mulholland Highway and rolled down an embankment around 12.45am on Sunday.

The report said Hart and the driver, 28-year-old Jared Black, suffered “major back injuries” and were taken to hospitals.

Another passenger, 31-year-old Rebecca Broxterman, only complained of pain.

Hart, best known for roles in movies such as Night School, Ride Along and Get Hard, had been named as host of this year’s Academy Awards but stepped down following criticism over alleged homophobic tweets.

A representative for Hart didn’t immediately reply to messages. The crash was first reported by the website TMZ. – Guardian