From war-zone beginnings, the event is now a cornerstone for the global film industry 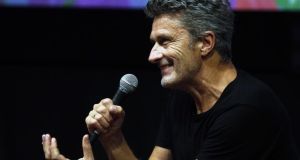 Polish film director Pawel Pawlikowski described Sarajevo as ‘hard to sleep in’, not just because of the parties but because it’s a mindf*ck of history’. Photograph: Fehim Demir/EPA

“Michael, Michael” they shouted, gesticulating wildly with three fingered salutes from the cheap seats at a red carpet event on Susan Sontag Square.

Michael Fassbender, attending the Sarajevo Film Festival (SFF), turned to me and said “they’ve been doing that everywhere I go . . . have you any idea what’s up with that?”

It was odd behaviour indeed, as Sarajevans are known for their celebrity cool; they have been through the longest siege in modern European history (1,425 days); they were the centre of cinema and music in former Yugoslavia; and Archduke Franz Ferdinand was assassinated here sparking the first World War.

They live in a place that Polish film director Pawel Pawlikowski – recipient of the Heart of Sarajevo Award – described as “hard to sleep in”, not just because of the parties but because it’s a “mindf*ck of history, a conundrum, layers and layers of complexity”.

Bosnians are humourous and anarchic, that kind of spirit and mind is well able for the 21st Century

No surprise, then, that the Sarajevo Film Festival – which has just celebrated its silver anniversary – was described by Kenneth Turan in his travelogue on film festivals as that “prominent symbol of the cross-pollination of modern culture”, an attempt to remove the stigma of the “bloody Balkans” and a reminder to the world that Sarajevo deserved a place “in the cosmopolitan artistic cosmos”.

And boy have they done that.

A film festival which was born of war in a sandbagged basement in 1995, where war time ticket prices had been firmly established at seven cigarettes, has become the pre-eminent regional festival in south-east Europe, hosting over 2,000 film professionals, screening 270 films from 56 countries, to an audience of 100,000 powered by CineLink, a massive industry event supporting talent and film co-production across the region and beyond.

U2 – true to their word – played in Sarajevo in 1997 shortly after the Dayton peace agreement was signed. Bono returned as a guest of the film festival in 2010, saying presciently: “I have fun when I come here. It’s an important place, not just for the past but for the future.

“When you look at what is happening in the middle East it’s important that Sarajevo succeeds . . . and I am a fan. Bosnians are humourous and anarchic, that kind of spirit and mind is well able for the 21st Century”.

In 2009, Stellan Skarsgård presented Irish director Juanita Wilson with the prestigious SFF Katrin Cartlidge award – supporting new voices, new perspectives and visions – for her short film The Door, an offbeat take on the Chernobyl disaster. She returned for the world premiere of her feature film As If I Am Not There.

Based on a fictionalisation of the experiences of women raped during the break-up of Yugoslavia – 50,000 victims is the current best estimate – it is a beautifully brutal film with a compelling central performance by a Macedonian actor of Serb descent, Nataša Petrovic.

When the final credits rolled at the grand Austro-Hungarian national theatre, there was absolute silence, save for the whirr of the projector, and tears ran down the faces of women sitting on either side of me.

My own modest contribution to the SFF was as producer of Finding Family, a Bafta-winning documentary about an orphan from Sarajevo made good in the UK, trying to unearth his roots. It opened the documentary section of the 2012 edition of the festival. As the SFF head of the competition jury, Joslyn Barnes said, “I have seen my share of standing ovations, but never one where the entire audience is also crying”.

It’s not been all unrelenting bleakness from the Irish contingent. Song of the Sea from Kilkenny’s Cartoon Saloon wowed them at the Children’s programme, Sing Street, the coming of age musical comedy directed by John Carney, played to a full house here.

Michael McDonagh’s The Guard stole the crown, garnering rave reviews and the much coveted SFF Audience Award in 2011. I sat in the vast open-air cinema with 4,0000 others as they laughed uproariously from beginning to end of Brendan Gleeson’s performance. They got it, all of it. It’s true what they say Irish and Bosnians, I might say Celts and Balkanites, share a similar mentality and dark humour.

Again it was the line at the beginning of the film about Kabul cinemas being a place where you could pay for your ticket with bullets that struck a deep cord in Sarajevo during this journey of a film from Kosovo to Kabul and back to Washington.

But now back to Michael and the gesticulating Sarajevo throng. Apparently, in the bar scene from Quentin Tarantino’s Inglorious Basterds, Fassbender plays a British agent disguised as a German officer who is exposed as an imposter when he orders three whiskeys with his index, middle and ring finger – the British way – instead of his thumb, index and middle finger – the German method.

The deep irony, not lost on Fassbender’s newly acquired Sarajevan fan base, was that ordering anything with the “German three fingers” is absolutely verboten in Sarajevo since the war, because the German form also happens to be the Serb form signifying the Orthodox Holy Trinity often seen being used by leery/defiant Serb combatants waving from tanks or burnt out buildings at “foreign” TV crews during the break up of Yugoslavia.

You might think from this description that the festival is all symbols and stars, but nothing could be further from the truth. So informal is the whole thing that you can, if you put your mind to it, get tickets for literally any event, red carpet or otherwise.

You could just as easily end up having coffee with the extraordinary Macedonian director Teona Strugar Mitevska chatting about her 2019 award winning new film God Exist and Her Name is Petrunija or the shy and brilliant David O’Reilly, who screened RGB XYZ here.

Those so-called stars are fully aware of the their power and how fleeting it is. As Bono said while being interviewed here, “celebrity is ridiculous but it’s currency and gives you the spotlight . . . I can talk about bullshit or the things that matter and I talk about what matters.

“Places where there is tension, there is great art. In the Sarajevo Film Festival art is not just ornamental, it is a means of communicating the struggles of the human spirit absurd and ridiculous as these stories may be”. Happy 25th Birthday Sarajevo Film festival and see you next year.