Asterix: The Secret of the Magic Potion – these Frenchmen are crazy!

Review: The animation is routine and our favourite characters don’t get enough to do 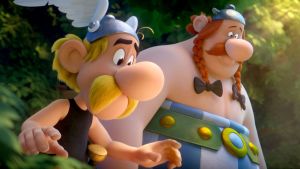 Asterix: The Secret of the Magic Potion. The original story has Getafix slipping into a late-life crisis and declaring that he needs a successor to take over magic-potion duties.

Film Title: Asterix: The Secret of the Magic Potion

“The year is AD 2019. Cinema is entirely occupied by Disney. Well, not entirely... One small village of indomitable Gauls still holds out against the invaders...”

If you get my hilarious joke then you’ll be amenable to the latest attempt to flog everyone’s favourite wing-headed brawler to an international audience. Awful people with Finnish furniture and cars that run on wave-power prefer Tintin, but Asterix has always been funnier, less associated with fascists and less openly racist (though still quite racist). By Toutatis, I welcome this latest release and may the sky fall on our heads if I tell a lie.

With the best will in the world, it is beyond my powers – not having fallen in the cauldron as a baby – to talk Asterix: The Secret of the Magic Potion beyond two stars. Never mind. The French have already powered it to $40 million. So, it won’t matter too much if we point out that the animation is routine, the story is haphazard and our favourite characters don’t get enough to do. (These Frenchmen are crazy!)

If you’re still interested, the original story has Getafix slipping into a late-life crisis and declaring that he needs a successor to take over magic-potion duties. He and his pals head out on a tour of Gaul that puts them the way of an evil druid with Vincent Price’s delicious claret vowels.

The visuals, though scrappy, are just about preferable to the live-action mess that fouled up cinemas in the early part of this decade, but the clean charm of Albert Uderzo’s beautiful artwork is still absent. Also missing are the elegant puns that Anthea Bell brought to the translations that brightened up so-many Anglophonic childhoods.

Indeed, it would, with this evidence alone, be hard to explain the appeal of the original comics to someone from outside the “Asterix community”. Let us console ourselves with a big banquet while the film-makers lie tied up and gagged at the front gate. Acta est fabula.