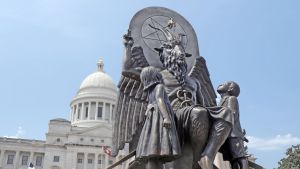 Thank God for Satan. In 2013, Harvard chums Lucien Greaves and Malcolm Jarry made headlines when they held a press conference at the Florida State Capitol. Billing themselves as the Satanic Temple, they heaped praise on Floridian governor Rick Scott for signing a Bill to permit student-led “inspirational messages” at school events, a piece of legislation they welcomed for “allowing our Satanic children the freedom to pray in school”.

That act of prankster activism (prankstivism?) became a blueprint for an organisation that has become one of the fastest growing religions in America. We say religion, but the Satanic Temple praises neither gods nor devils, preferring civic duty (picking up litter on beaches and highways) and a nice, sensible set of seven humanistic principles including “The freedoms of others should be respected, including the freedom to offend”.

Penny Lane’s devilishly entertaining documentary chronicles the growth of the Satanic Temple as they blossom from a small group of outsiders and LGBTQ activists into an international movement. Each member has their own story. One recalls becoming disillusioned with Christianity after his teacher explained that Gandhi, as a heathen, went to hell. Other members are legal eagles working to preserve the separation of church and state, as guaranteed by the First Amendment of the US constitution, efforts that invariably translate into impish judiciary challenges and lively performance art.

To date, they have sued Missouri over abortion law, launched a campaign against corporal punishment, crashed into pro-life protesters with a Pasolini-worthy exhibition of baby fetishisation, founded after-school Satan clubs to promote scientific rationalism, and visited the grave of Westboro Baptist Church minister Fred Phelps’s mother, in order to posthumously “convert” her to lesbianism.

Most memorably, the Satanic Temple have challenged the erection of Ten Commandments Monuments on state Capitol grounds in Arkansas and Oklahoma by popping up with their own two-metre statue of Baphomet, the Sabbatical goat beloved by heavy metallers.

Film-maker Lane’s 2016 animated documentary Nuts! outlined the life of John Romulus Brinkley, a charlatan who attempted to cure impotence with goat testicle transplantation in 1917. With Hail Satan? she has happened upon folk who are as clever and irreverent as she is. Shortly after completing the film, Lane became a member of the Satanic Temple. Who could blame her? Satan hasn’t looked this appealing since John Milton’s romantic write-up in Paradise Lost.