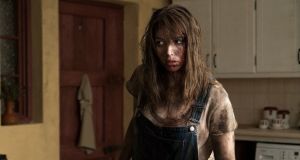 Seana Kerslake in The Hole in the Ground 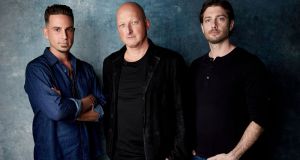 There was good news for the Irish industry with excellent reviews for Lee Cronin’s horror The Hole in the Ground. An impressively atmospheric piece that surrounds the viewer in unease from the opening frame, the picture is released by Wildcard Distribution on March 1st.

It stars Seána Kerslake as a young mother who, after relocating to gloomy woods, suspects that her son may have gone dangerously peculiar.

Already acquired by canny US distributor A24, the film was sure to attract the attention of attending critics. Guy Lodge in Variety noted: “At a time when the obnoxious term ‘elevated horror’ keeps making the festival rounds, Cronin’s nifty debut is happy to meet the genre at its level.”

Ian Sandwell at Digital Spy was more positive still. “If your nerves can take it, here’s your first great horror movie of 2019,” he wrote in a four-star notice. “It’s a simple, sinister film that really digs its claws in,” Perri Nemiroff at Collider agreed.

Also screening on the opening days was Irish co-production Shooting the Mafia. Kim Longinotto’s documentary examines how Italian photo-journalist Letizia Battaglia detailed the history of the Mafia in Palermo.

“Her personal story, and the wider picture of a society living in fear, make for a compelling and moving documentary that is rich with commercial potential,” Allan Hunter wrote in trade paper Screen Daily.

Garry Keane and Andrew McConnell’s Gaza, a study of that troubled region, is due to premiere at Sundance on Tuesday. Both those documentaries will screen at next month’s Virgin Media Dublin International Film Festival.

It is now over 40 years since the first incarnation of Sundance Film Festival kicked off (it was named Sundance in 1984), but the this event really came into its own with the US indie boom of the early 1990s. Film-makers such as Quentin Tarantino, Paul Thomas Anderson and Steven Soderbergh got vital breaks there.

Irish films such as John Carney’s Once and John Crowley’s Brooklyn began their runs to the Oscars in the ski resort.

In recent years, Sundance has worked hard to forward diversity in film-making and satellite businesses. “This year we’ve done something that no other festival has done to our knowledge.” Keri Putnam, director of the Sundance Institute, announced. “We’ve published demographic data on all of our applicants to the festival and to our labs.”

Some 63 percent of of credentialed press are from previously under-represented groups. “We realised, frankly later than we should have, the implications of the fact that the diverse community of artists here were premiering their work to mostly white-male critics.” Putnam said.

Caroline Libresco, senior programmer, confirmed that: “47 percent of directors across all films and pieces of art in the festival are … women.”

Handing over to Putnam at the opening press conference, Robert Redford, the festival’s founding father, intimated that he might be edging towards retirement. “Having done this for – God it’s 34 years now since the festival started – I think we’re at a point where I can move on to a different place,” he said.

If Redford is making for the door then he looks to have picked a busy time to make that move. The world’s media turned to Sundance at the first weekend for the premiere of HBO’s Leaving Neverland.

Wade Robson and James Safechuck, who attended the screening, speak in gruelling detail about abuse they allegedly endured as boys at Michael Jackson’s Neverland Ranch. Robson and Safechuck were aged seven and 10 when the reported events occurred.

Kenneth Turan, veteran film critic for the Los Angeles Times, observed: “A Sundance Film Festival first: introducing the screening of the disturbing Leaving Neverland Michael Jackson documentary, festival director John Cooper announced ‘there will be health care professionals’ in the Egyptian Theatre lobby if needed. This is one intense film.”

Jackson’s estate responded angrily to the airing of the accusations. “The two accusers testified under oath that these events never occurred,” a statement read. “They have provided no independent evidence and absolutely no proof in support of their accusations, which means the entire film hinges solely on the word of two perjurers.” A small protest was staged outside the auditorium.

Reviews suggest the film, which will screen on Channel 4 in the spring, was unflinching in its explicitness.

Some early controversy has also gathered around Zac Efron’s role as serial killer Ted Bundy in Joe Berlinger’s provocatively titled Extremely Wicked, Shockingly Vile and Evil. The picture has received middling reviews for its sober treatment of Bundy’s early life, but critics have been unrestrained in their appreciation of the leading man.

“Efron doesn’t require extreme weight gain or prosthetic teeth to transform, just an as-yet-unseen ability to lean into his dark side,” Benjamin Lee wrote in The Guardian.

Elsewhere, the buyers have been circling less gruelling fare with a mind to highbrow dollars and next year’s awards season. The word is good on Alma Har’el’s Honey Boy. Working from a script by Shia LaBeouf, the picture addresses that actor’s struggles as a child performer.

Amazon Studios forked out $13 million for another autobiographical piece: Nisha Ganatra’s much-liked Late Night finds Mindy Kaling writing and starring in a film derived from her experiences as the sole female writer on The Office.

Much more cash will be lobbed around before The Sundance Film Festival closes on February 3rd.