Some Like it Hot, A Star is Born, The Wizard of Oz ... and other great remakes 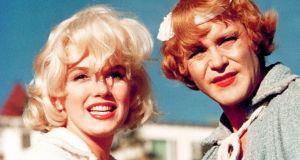 There is still a myth abroad that the remake is always a pale copy of the original. It does little good to again point out that the most famous versions of The Wizard of Oz, The Maltese Falcon, Some Like it Hot and A Star is Born (the Gaga one is the fourth) are all retreads of earlier movies.

Yet many of the great directors – Cecil Be DeMille, Michael Haneke, Alfred Hitchcock – have been happy to remake their own films. It seems the filmmakers themselves don’t buy the orthodoxy.

These ruminations are prompted by the imminent arrival of Sebastián Lelio’s Gloria Bell. Featuring Julianne Moore as a divorcee coping with bad men and annoying family, the picture is a re-imagining of the same director’s Gloria from 2013.

The action is moved from Santiago to Los Angeles. Moore takes over from Paulina García. But the tone and the emotional temperature remain very much the same. It was Moore who talked the Chilean filmmaker into the project.

The film has received excellent reviews and will give Moore a sniff of nominations in awards season. It belongs in a category of self-remakes that rarely drift too far from their source: English-language versions of films originally in other tongues.

Michael Haneke was frank about his reasons for remaking Funny Games, his grim 1997 home-invasion thriller, as an American film in 2007. The first picture was, in part, about the desensitising effects of violence in the media, and he felt that the US needed to hear his message more than any other country.

Unfortunately, Funny Games US, starring Naomi Watts and Tim Roth in a virtual Anglophone facsimile, was seen by almost nobody in the target market and Haneke returned grumpily to the Austrian coalface.

Less successful still was George Sluizer’s remake of his 1988 thriller The Vanishing. Featuring Jeff Bridges and Jeff Harriman in a tone-deaf reprisal of that international hit, the film landed with a splat. Mark Kermode remarked: “The original was about the banality of evil, but the remake became about the evil of banality. It was a mess.”

There is no reason that such remakes shouldn’t work. In the early days of cinema it was commonplace for versions in two (or more) languages to be shot simultaneously. The German and English versions of Fritz Lang’s M are both excellent.

It can be done, but even experienced directors like Sluizer – already a veteran on the US release in 1993 – found it difficult to handle the shift from European to Hollywood values.

The more interesting revisions have been those that found a director attempting to improve on earlier work by the application of newer technologies, larger budgets or greater experience. Cecil B DeMille and Alfred Hitchcock, two of the most successful filmmakers of all time, were not above a second crack at early successes.

DeMille’s 1923 take on The Ten Commandments is a defining example of epic silent filmmaking and of moral righteousness in action. Shot in an early version of Technicolor, the film retold the Moses story alongside a contemporary parable that demonstrated the virtues of following the Decalogue’s messages.

Thirty-three years later, as TV was beginning its rise, the moral finger-wag was not going to hold viewers attention, and DeMille went for full-on widescreen deliciousness. Despite being set a few millennia earlier, the 1956 film is very much of its time: decadence flogged to the masses as translated scripture.

Released three years later, Hitchcock’s The Man Who Knew too Much – starring Jimmy Stewart and Doris Day – is a subtler, more canny reworking of a 1934 British predecessor. “Let’s say the first version is the work of a talented amateur and the second was made by a professional,” Hitch told François Truffaut a decade later.

It sounds a little as if he’s talking down the earlier film to satisfy a Frenchman who was famously dismissive of cinema across la Manche. Featuring a notable early turn from Peter Lorre, the first Man Who Knew too Much has a clamminess that was then very much the director’s own, but the 1956 film unquestionably makes good use of the endless resources then at Paramount Pictures’ control. The closing Albert Hall sequence is a classic.

The most satisfactory self-remake must, however, surely be Michael Mann’s now legendary Heat. This is a bit of a cheat. The director, famously a co-creator of Miami Vice, filmed LA Takedown as a pilot for an NBC series in 1989. The roots of the 1995 classic are, nonetheless, all firmly in the soil.

The picture concerns a ragged cop on the trail of a professional thief with his eye on the big prize. Mann had already honed a sleek, chromium-hard style of crime thriller in such pictures as Thief, but, by 1995, that approach had evolved into a suave aesthetic that no contemporary could equal.

Heat refines, develops and expands LA Takedown. The jump from the TV movie to the theatrical epic feels more significant than the progress, over two decades, between the two versions of The Man Who Knew Too Much.

There are second chances in Hollywood and, more often than you might expect, they deliver happy results.

Where did it all go wrong for Johnny Depp?
8

The pros and cons of being a writer
10