Why remake your own film? ‘One answer: Julianne Moore’

Chilean filmmaker Sebastián Lelio, who won an Oscar for A Fantastic Woman, has remade his 2013 drama Gloria – and this time it’s set in LA 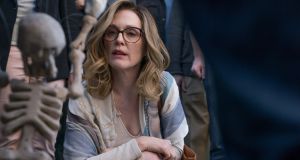 Julianne Moore as the kind, determined divorcée in Gloria Bell

“When you complete a film it’s like like leaving a present in the livingroom and hiding behind the sofa,” Sebastián Lelio says. “You can only witness what happens. You can’t control it. The films have to have enough power and strength to stand up on their own.”

The Chilean filmmaker has, so far, enjoyed great success with his gifts. His 2013 drama Gloria, concerning a determined middle-aged woman kicking against lesser spirits, won star Paulina García best actress at the Berlin Film Festival. His follow-up, A Fantastic Woman, following a bereaved transgender woman in Santiago, won the Oscar for best foreign language film. Now, he embarks on a remake of Gloria starring Julianne Moore in the central role. Gloria Bell, as the new film is titled, is a rare English-language retread that survives the translation. Moore is terrific as the kind, determined divorcée enduring bad boyfriends and uninteresting family.

Yet it remains a peculiar choice for a rising director. Why would he risk it?

“Well, there is one answer: Julianne Moore,” he laughs.

It seems that Moore loved Gloria and asked to see Lelio. They met and had dinner.

All of which was very nice. It is educative to place one film beside the other. The great surprise is how little is altered in the move from Santiago to Los Angeles. The women encounter the same patronising attitudes. They respond with the same quiet determination. They both like Gloria by Laura Brannigan. I wonder if more would have changed if he’d shifted the story to some rural part of Chile.

“That’s interesting. I never thought of that,” he says. “But with globalised societies there are more things in common between most cities than between those cities and the rural zones around them. Cultures do become more equivalent as a result.”

One of the best-reviewed films of its year, Gloria connected with viewers in dramatic and emotional fashion. Lelio has a notion why.

“The fact that everyone seems to know a Gloria,” he says. “That keeps surprising me. ‘I know a Gloria. My sister is just like her.’ That sort of thing. The other thing that surprises me is people saying: ‘I want to be like Gloria.’ Even men. That can be really relatable. That makes a connection between people and the character.”

So who was his Gloria?

“Ha ha! The original is a collage made from a woman I know and through my mother and her friends,” he says.

Lelio’s triumph at the Oscars confirmed the advance of an impressive new generation in Chilean cinema. Pablo Larraín has received raves for Tony Manero, No and Jackie. Sebastián Silva has done well with The Maid and Nasty Baby. They are all in their forties. Each has a singular voice. Such movements happen in countries – in Denmark, Iran, Korea – and it is always difficult to say exactly why.

“During the dictatorship that ended in 1990 Chilean cinema was dismantled,” Lelio says. “The fragile industry was killed. Cinema went underground or into exile. I have seen how the entire machinery of the industry has been rebuilt since then. I belong to the generation that went to film school in the mid-nineties. When I met Pablio and Sebastian – they are now good friends – we were all: ‘Hey how do we make films?’”

The rebound from dictatorship has propelled these filmmakers to the top of the critical heap. Lelio (whose English couldn’t be sharper) also profited from a childhood spent moving from culture to culture. He was born in Argentina and, still a child, moved with family to the central Chilean city of Viña del Mar. He lived for a while in the United States. He studied journalism before going to film school and meeting up with the posse that would reshape their national cinema.

That Oscar looks to have confirmed the breadth of their achievement. He still seems slightly bewildered by it.

“Fantastic Woman premiered at Berlin, a year before the Oscars,” he remembers. “It began to run way from us and we were chasing it. It had that momentum. Then suddenly I was getting an Oscar. It was, like… what?”

A Fantastic Woman now looks like an important film. Daniela Vega, who played the title character, became the first transgender person to present at the Academy Awards and was named one of Time magazine’s most influential people. It won awards everywhere. It changed the country.

“It was the first time a feature film from Chile got an Oscar,” he says. “It became part of the collective memory and I really felt that when I came back. I received so much love. What was really remarkable was that there was a dormant gender identity Bill in congress. It was a collective struggle by many different social organisations. But nobody was doing anything about it.”

The film generated conversations that got the Bill moving again. A few months after the Oscars the law changed to enhance transgender people’s rights in Chilean society.

“I would never say the law was approved only because of the film,” he says. “But it helped get the conversation started. The actress, Daniella Vega, was very helpful with that.”

When I ask if there was any kickback from conservatives he actually guffaws at the redundancy of the question.

I come from a largely Catholic country as well. I know how this works.

“Everything is divided by the cross!” he says. “And the right wing is very bible oriented. When the film came out in Berlin the extreme sectors were saying: ‘God created man and woman. This is an aberration. We will legislate over our dead bodies.’ A year later it was too late.”

Lelio’s peripatetic childhood looks to have bled into his middle age. In recent year’s he has lived in Berlin and, after a spell at home in Chile, is now looking around for another city to explore. He deserves a rest. In between A Fantastic Woman and Gloria Bell, he directed Rachel McAdams and Rachel Weisz in the well-received adaptation of Naomi Alderman’s Disobedience. That film, concerning a same-sex romance in London’s Orthodox Jewish community, was his third film in a row with a female protagonist. The remake of Gloria followed. Is there a pattern?

“Well, not really. I could make something up. Ha ha!” he says. “The main reason is because there is something really moving about following these particular characters. I like to look at characters who are maybe forgotten by mainstream narratives and put them at the centre.”

There will be more of that. He needs to find a place to live first.

“I already gave myself a break – for a month,” he says.”I am happy to let Gloria Bell into the world. Now I am looking forward to new adventures.”