Papi Chulo: It really shouldn’t work as well as it does 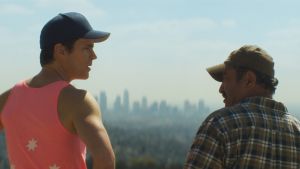 Mostly a comedy: Matt Bomer as Sean and Alejandro Patino as Ernesto in Papi Chulo

John Butler, Irish director of The Stag and Handsome Devil, strays into hazardous territory with his first American film. Papi Chulo concerns the unusual relationship between a depressed Anglo weatherman and the Spanish-speaking worker he hires to paint a damned spot on his deck.

It is mostly a comedy. It touches on class divisions in Los Angeles. There was, however, every danger that the scenario could make a patronising Holy Migrant of the Mexican character. The credit for avoiding that landmine goes partly to Alejandro Patino, whose wry shrugs as the long-suffering Ernesto communicate that handyman’s appreciation of the galloping absurdity, and partly to Butler’s own script, which skirts peril with admirable dextrousness. It really shouldn’t work as well as it does.

The busy actor Matt Bomer stars as the handsome, troubled Sean. We begin with him having a minor breakdown while talking viewers through another day of boring heat and repetitive sun in Los Angeles County.

He is advised to take a sabbatical and, now with too much time on his hands, only sinks deeper into depression. Sean, who is gay, has been left single after a long relationship and is now settling for the most anonymous class of online dating.

A plant deposited by his former partner left that mark on the deck and now – rather nicely – it stands as a geometric reminder of less lonely times. Ernesto is hired to paint it out and Sean, despite (or perhaps because) of the language barrier between them, takes to using him as non-responsive agony uncle.

The troubled Don Quixote hires his Sancho Panza to go on hiking trips and jaunts in rowing boats. Ernesto appears to grasp the situation immediately and, with no ill-feeling or disrespect, settles in to make himself some easy money.

There’s no getting away from the fact that the working-class character does seem to have a less complicated and more instinctive connection to human travails than his better-off professional pal. That cliché is a little awkward.

But the film stages many compensatory gags as it embarks on an impressively efficient dissection of Sean’s emotional trauma. One half-twist is pleasing. Another confused the heck out of me. The interplay between the two actors is lively throughout.

We end up with a small film that answers most of its own questions satisfactorily. The Butler did it (again).

Level 5 lockdown TV: From The Crown to Dead Still, the ultimate guide to what to watch
8