Matt Bomer: ‘After two days in Galway, I thought: I’ll just do another lap around the town’

The actor on Los Angeles, being authentic and returning to ‘huge’ Galway 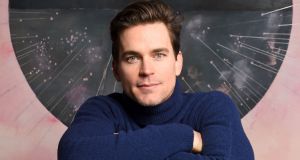 Fate has made at least one effort to keep Matt Bomer in Ireland against his will. About 20 years ago, when he was still a student, he spent time as a barman in Galway.

“I meant to go on to Israel but they lost my luggage,” he says. “There was my suitcase behind the desk in Aer Lingus and I thought: this is a sign that I should stick around. I stuck around in Dublin for a month. I was 21. I had the summer of my life.”

Will you look at him now? An indecently handsome fellow with a jaw by the firm that did Buzz Lightyear, Bomer modestly explains that he worked every sort of low-level job when making his way show business. But his CV reveals that, within a year or two of his Irish adventures, he had become an essential part of the entertainment complex. He was a regular on the daytime soap Guiding Light. He was in the original workshop production of hit musical Spring Awakening. He was in Steven Soderbergh’s Magic Mike. You can see him in the current DC series Doom Patrol. There’s plenty more where that came from.

We meet at the Merion Hotel to speak – among other things – about his role in John Butler’s LA comedy Papi Chulo. The Irish director’s follow-up to The Stag and Handsome Devil has already picked up strong reviews at the Toronto International Film Festival and The BFI London Film Festival. Bomer plays a gay weatherman who, recently left single and lonely, forms an unlikely friendship with an older Mexican gardener.

“There are a lot of things specific to LA that the film captures,” Bomer says. “There’s a loneliness that John relays and captures on film – the extreme isolation you can experience there. It’s about a man who puts on a very brave, chipper face at work. But underneath he is going through this horrible pathos.”

The film also gets at the parallel cultures that exist in Californian society. An English-speaking bourgeoisie connects only intermittently with the Spanish speakers who cut their lawns and mind their children.

“You can’t not be aware of that,” Bomer says. “I’m not sure it’s to do with class. But we live in times where society is becoming more divided. I wanted to be in a film that was about coming together and you here have a hero who’s from a migrant community. I had an immediate gut response. It caught LA so profoundly.”

Bomer comes from somewhere else altogether. Indeed, like so many Americans, he is from a bunch of other places. He was born in Saint Louis, but all his people came from the South. When he was still a kid, his father moved the family to Texas. Ploughing through his biographies, one is struck by the fact that dad once played for the Dallas Cowboys. Doesn’t that make you royalty down there?

“Well, I wouldn’t got that far,” he laughs. “But it takes you a long way in Texas. I grew up in a Friday Night Lights kind of town. It’s still an important thing in Texas.”

He tells me that the urge to act came from an early childhood desire to pretend. Bomer didn’t know how to “externalise” that until he took a class in improvisation. He reckoned that he had a found a way to exercise the various fascinations that had diverted him as a young man. He arrived in New York just before 9/11 and struggled a little during those difficult years for theatre. But he soon landed that gig on daytime soap. That brings an odd kind of fame. You’re not on the cover of Time, but millions know your face and fret about your affairs.

“People who are fans of the soaps – they’d call them “stories” – were very invested,” Bomer laughs. “They would often interact with me as the character. I was going through customs when my character, Ben, was being particularly cruel to the matriarch, Mara, and a woman turned to me and said: ‘You’d better be good to Mara!’ She was legitimately angry. She may have been putting me on. But she was convincing.”

Actors who’ve been through the daytime-soap experience rave about how much and how quickly they learn. There’s no time to be precious.

“That was like being paid to go to grad school,” he agrees. “I wouldn’t change that for the world. Thank God I had a year of that. Before I started I was afraid of the camera. I thought I’d only do theatre. It was like being shot out of a cannon.”

After that, the world opened up to him. Bomer busied himself on TV, film and theatre. In recent years, he has directed episodes of The Assassination of Gianni Versace: American Crime Story and appeared in a few “sexiest men in America” lists. Somewhere in there Bomer also publicly acknowledged that he was gay. Married to the publicist Simon Halls, he has three children.

You don’t need a degree in statistics to conclude that the number of top-flight gay actors in Hollywood is still suspiciously low.

“Certainly, publicly so,” Bomer says with no hint of irony.

Why are we still in that place?

“I think it got better over the years,” he says. “There is still a cost to being your most authentic self. But to me it’s worth the price. I would rather have my authenticity – particularly with my kids. That’s not worth any studio role to me. But if you are out there on your own and you are not secure in where your career is going it’s a risk.”

So he thinks that coming out is still a risk? Even after all the shifts in perception over the last decade, the industry still seems baffling nervous about this issue. Do we believe that gay actors will have trouble being cast as straight romantic leads?

'Studios are corporate entities. A lot of people are in on the decisions. There is not enough representation.'

“I wouldn’t say that was the case,” he says cautiously. “Look, these are conversations I rarely have anymore. It’s been so long. I do think that an agent’s concern is to make money. If they want their clients to make the most money then that means leads in studio films. That is harder to get if you are openly gay.”

“Studios are corporate entities,” he sighs. “A lot of people are in on the decisions. There is not enough representation. It is not as good as it could be. But there is progress. The general public is calling for it. They are ready for it. So often times independent film is the first to arrive on the scene.”

Papi Chulo, for all the tidiness of its budget, has brought Bomer around the world. It even brought him back to Ireland. The country has changed a bit since he visited in the millennial years. We have a few new bridges. We’ve reupholstered the constitution.

“Going back to Galway, I didn’t think it had changed that much,” he says. “I remember it seeming so huge. I went back and I thought: I’d need at least two days to catch up with everything. After two days, I thought: well, I guess I’ll just do another lap around the town.”

Philosophy and a little passion: Roy Foster on WB Yeats and politics
10