Dirty God: A traumatised woman struggles after an acid attack

Review: Debutant Vicky Knight turns in a fine performance in this tale of survival 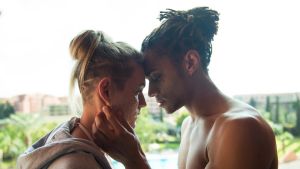 In Dirty God Jade indulges in a flirtation with her friend’s boyfriend Naz (Bluey Robinson) that may undermine the last friendship she has.

A young woman is scarred by an acid attack in this London-set, Irish co-production from Dutch film-maker Sacha Polak. Jade (Vicky Knight), a young mother, is discharged from hospital and returns to her mother’s flat. Jade’s appearance causes her daughter to scream. Later Jade recounts a time when her daughter called her a monster during a hospital visit. “But it’s a nice monster,” explains her mother.

She makes terrible choices, including keeping her daughter out all night and, against her doctor’s advice, looking into cheap plastic surgery in Morocco. There’s an ongoing flirtation with Shami’s boyfriend Naz (Bluey Robinson) that may undermine the last friendship that she has.

There are small but affecting humiliations – her mother maintaining contact with her ex-boyfriend’s family and a work colleague discovering a video of her online – that leave Jade reeling.

Watching Dirty God it’s impossible not to think of Andrea Arnold’s Fish Tank. Both films are set in the context of housing estates and pivot on an unpredictable heroine.

The script, co-written by Polak and Susie Farrell, is subtle and naturalistic in its exploration of self-image. Jade’s injuries, inflicted by an ex-boyfriend, are horrific but the inadequacy she feels gazing at impossible standards of beauty is unexceptional.

Newcomer Vicky Knight was herself a childhood victim of an arson attack but the make-up department has exaggerated her scars so that watching Jade return to her old haunts makes for uncomfortable viewing. Knight delivers a terrific performance that is as complex as the sometimes maddening, frequently stupid, and always sympathetic character that she plays.

Ruben Impens’s camerawork is as skillful in darkened corners as it is shooting sweeping north African tableaux. Rutger Reinders’s score is equally impressive.