So what is the meaning of Lowery’s existential fable ‘A Ghost Story’? 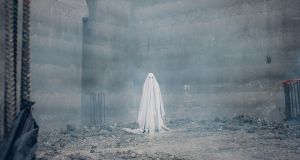 A still from A Ghost Story by David Lowery. “I never conceived of A Ghost Story as a horror film. But I do love the genre.” Photograph: Andrew Droz Palermo

Get ready to theorise and speculate. We may only be half way through 2017 but David Lowery’s fourth feature film, A Ghost Story, is unlikely to be surpassed for multiple readings and occasionally wacky theories.

Shall we begin? It’s an allegory about toxic masculinity in which a phantom torments a single mother and her young immigrant family. It chronicles the history of Texas from its early colonisation by European settlers and gestures toward America’s eventual post-industrial implosion. Taking cues from Dickens, it uses its titular spectre to critique capitalism and materialism. It’s about the near-cosmic level of voyeurism fostered by the internet age.

So what is the meaning of Lowery’s melancholic, existential fable? And where does the dessert come into it?

If that wasn’t enough food for thought, A Ghost Story also contains a scene wherein Rooney Mara, grieving her dead lover, stress-eats an entire pie. Mara has subsequently admitted that the pie in the scene – a sugar-free, vegan chocolate-pudding pie – was the first she had ever tried.

So what is the meaning of Lowery’s melancholic, existential fable? And where does the dessert come into it?

“It’s been amazing to hear and read all these theories,” says the writer-director. “Because I went into it with such specificity and almost a narrow focus. It’s been a wonderful surprise to hear what audiences get out of the film.

“Very often they are getting out exactly what I intended. But sometimes they bring a unique perspective that I could never have anticipated. I never say it’s not about toxic masculinity or about Texas. And voyeurism is certainly a big part of it. Robert Altman said something once about this phenomenon. Which is that every single element of a movie is readable intuition. I’ve hung onto that phrase.”

Ever since A Ghost Story was released to a great deal of chatter and a screen average of $27,017 (almost a thousand bucks more than the per-theatre-average scored by Spider Man: Homecoming over its opening weekend) in the US, competing religions are battling for its soul.

At a recent New York screening, Tibetan practitioners were keen to stress that the journey taken by the titular wraith enacts the Buddhist concept of Bardo, that is, the state of existence intermediate between two lives on earth.

Meanwhile, Kurt Jensen, writing for the Catholic News Service, describes A Ghost Story as “the best film about purgatory you’ll see this year”.

Lowery, the eldest of nine children and the son of Mark Lowery, a professor of theology at the University of Dallas and the former editor-in-chief of the Catholic Social Science Review, nods when I suggest that there may be a Catholic sensibility underscoring his new film.

“My mother would be very happy to hear you say that,” he laughs. “I was definitely raised Catholic. Very Catholic indeed. I no longer participate in Catholicism. But I have no doubt that it made a significant impact on me while growing up. I also suspect that whatever I do for the rest of my life will be thoroughly Catholic whether I like it or not.”

There are additional early influences. Aged six, Lowery imagined he saw the ghost of a young boy at the family farmhouse in Wisconsin, a spectacle he now attributes to an overactive imagination.

“At the time I thought I was real,” he recalls. “But looking back I assume I was just imagining things. I don’t really believe in ghosts, but I am open to the possibility that they might exist. I guess I’m agnostic on the matter.

“If I did experience a quantifiable supernatural phenomenon I don’t know how it would change me exactly. But it would certainly alter my perspective on the world.”

Virginia Woolf, one of Lowery’s favourite authors, provided a rather more tangible influence on the material. The film opens with a quotation from Woolf’s 1921 short story A Haunted House. Eagle-eyed viewers will likely spot further references to the pioneering modernist author.

“Orlando is one of my favourite novels,” says Lowery. “I love her letters too. She’s my guiding light. The way she uses time fascinates me. Especially in To the Lighthouse and Orlando. They play with time in this dynamic and fun way. I love the idea of a character existing outside of time in the way that Orlando does.

“So that was certainly on my mind when I was writing the screenplay. And I wanted to pay homage to her in some small regard. And I wondered if she had ever written about ghosts. So I did a Google search. And found A Haunted House. I couldn’t believe that I had never read it before.

“The first sentence begins: ‘Whatever hour you woke there was a door shunting’. I couldn’t resist extending that to the film. I hope that it encourages somebody somewhere to pick up her work. Because I owe a lot to her.”

We’re all vegan. So it starts there. We all eat in the same places

His sophomore effort, the 2013 Texas crime drama Ain’t Them Bodies Saints, starring Casey Affleck and Rooney Mara, was shortlisted for the grand jury prize at Sundance, and was selected for international critics week at Cannes. He had edited Alex Ross Perry’s Listen Up, Philip and produced Shane Carruth’s Upstream Colour when Disney approached him to direct the $65 million live action version of Pete’s Dragon.

Last summer, two days after he finished his much-admired reboot, Lowery secretly began shooting A Ghost Story with a $150,000 budget and his Ain’t Them Bodies Saints cohorts Affleck and Mara.

“There’s an ease to our collaboration,” says Lowery of his lead actors. “We’re all vegan. So it starts there. We all eat in the same places. We have similar dispositions. We’re all very quiet people. Making movies is challenging. It wears you out. It tries your patience. So if you can find people you get along with, it makes the whole process easier and enjoyable.”

Taking cues from the gorilla-suited spirit that haunts Apichatpong Weerasethakul’s Palme d’Or-winning Uncle Boonmee Who Can Recall His Past Lives, A Ghost Story concerns a young couple known only as C and M (Casey Affleck and Rooney Mara). They are debating a possible move out of their remote Texan home when C dies in a car accident, only to return as a low-tech apparition: an Oscar-winning actor with a sheet over his head, holes cut out for eyes.

C’s ghost watches as M moves on and others make the house their home, including a verbose Will Oldham, who makes a lengthy, appropriately cosmic monologue suggesting that all human notions of posterity are ultimately ephemeral. To underscore the point, C encounters another female ghost (Kesha under a flowery sheet) who has been waiting for someone for so long she has forgotten who it was.

“I don’t 100 per cent ascribe to what the monologue is saying,” says Lowery. “But it’s delivered in the presence of a ghost so it’s relevant. I agree with certain themes. I’ve found it very helpful to embrace the finite nature of my own work. And myself. There’s a sense of importance that comes from work. But I had to put that aside and to diminish my own sense of self-importance. I had to get over myself a little. Movies won’t be around forever.”

A Ghost Story arrives as part of a new wave of films – including Trey Edward Shults’s It Comes at Night, Jordan Peele’s Get Out, Robert Eggers’s The Witch, and Olivier Assayas’s Personal Shopper – that have been variously described as woke horror, post-horror, and new art horror.

“There’s definitely something there,” says Lowery. “There was an article in the Guardian recently that coined the term post-horror. I never conceived of A Ghost Story as a horror film.  But I do love the genre.

I never really think about the zeitgeist. But I recognise that these movies have something in common

“And I really want to make a horror film some day that scares people. In the meantime I’m happy to be included in this offshoot genre.

“I saw Personal Shopper a few months ago and it knocked my socks off. The way it used the language of horror film to a different end to most horror was really impressive. I was moved and perplexed. I never really think about the zeitgeist. But I recognise that these movies have something in common.”

Having just completed work on the upcoming crime drama The Old Man and the Gun (starring Robert Redford and Casey Affleck), Lowery will return to occult themes with the pilot for Strange Angel, a biographical drama inspired by the life of rocket scientist and Aleister Crowley devotee Jack Parsons. After that, he’ll reteam with the house of mouse for the live action Peter Pan.

“I’m working on the Peter Pan script,” he says. “The movie I just finished shooting is about as pragmatic and realistic as you can get, so that’s a brief detour. Otherwise, I love magic realism. I love the supernatural. I love things that go bump in the night. I love genre. I feel like I’ll keep making movies of that sort. They’ll always have something spooky running through them.”