Land of Mine review: when the shooting stops, the war begins 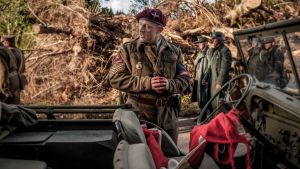 Roland Møller in Land of Mine

Film Title: Land of Mine

It’s a small thing, but we should probably get that awful English-language title out of the way first. Under Sadnet (literally “Under the Sand”), a tense Danish drama that was nominated for best foreign-language picture at this year’s Oscars, comes to us as Land of Mine. It concerns German prisoners of war clearing landmines. Get it? Was there nobody around to stop this?

Anyway, Martin Zandvliet’s film, though shamelessly manipulative, proves to be a taut affair that offers an interesting contrast with Christopher Nolan’s Dunkirk. Whereas that wartime drama, set a few hundred miles to the south, revelled in noise, effect and commotion, Land of Mine employs traditional character arcs and creeping tension. It is not always subtle. But it works.

The picture plays cleverly with our expectations by initially positioning the Allied commander as the villain and the young Germans as the heroes. We begin with Danish Sergeant Carl Rasmussen (the excellent Roland Møller) ripping his country’s flag from departing occupiers and savagely barking them back across the border. He has been charged with commanding a platoon of young Germans as they pluck hundreds of mines from a long stretch of beach. He wallops them. He makes it clear he cares not if they die. He refuses to give them food.

We never learn what personal traumas have chiselled away all empathy, but he is clearly exacting some sort of revenge. The men are pathetic, frightened and largely compliant.

We suspect some softening will takes place. It does, but Møller is sufficiently in command of the role to make his eventual moderation seem believable. More problematic are the array of emotional cliches that litter the drift to understanding. Yes, when Rasmussen and the boys become friends, they really do play a game of football. There’s a little girl with a dolly. There’s a dog.

Land of Mine is so ramped up with tension that those compromises are unlikely to nag until after the credits have rolled. Economic, impeccably acted and impressively aware of the moral conundrums -- when do wars really end? – the picture is, despite its grim substance, a crowd-pleaser of the traditional school.