Review: Lesley Manville excels and Neeson reminds us that he is still an amazing actor 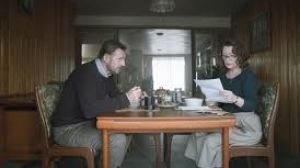 Joan (Lesley Manville) and Tom (Liam Neeson) are long-married and contented Belfast couple who go for walks along the coast (as far as the tree and turn), lightly bicker over how much beer to buy at the supermarket, and decide not to go out to eat as they’ve already left the chops.

They have lost a daughter years before, but these days, adding Worcestershire sauce to the soup is the most seismic development in their lives. Until, that is, Joan discovers a cancerous lump on her breast. She asks that Tom not speak of the matter at their dead daughter’s graveside as they embark on a very matter-of-fact medical journey, in which he struggles with the limitations of caregiving and she struggles with nausea and hot flushes.

The physical and emotional challenges that come with chemotherapy take their toll. Joan touchingly finds a friend in Peter (David Wilmot), a terminal cancer patient who would rather disappoint his boyfriend Steve (Amit Shah) than face another round of chemotherapy.

Co-directors Lisa Barros D’Sa and Glenn Leyburn came to prominence with the riotous features Cherrybomb and Good Vibrations. Working from a very personal screenplay from Owen McCafferty (his own wife also went through treatment for breast cancer) and using delicate brush strokes, the film-makers paint an intimate portrait of a couple. There’s a commendable touch of Japanese film director Yasujiro Ozu in Ordinary Love’s quietude and cinematographer Piers McGrail’s lovely pillow shots. As ever, Manville is excellent while Neeson reminds you that before he became a vengeful movie badass, he was an amazing actor. He still is.

Ignore the unassuming title: Ordinary Love is a love story that is extraordinary.