Knives Out: Mr Star Wars directs Mr Bond in a delight of a movie 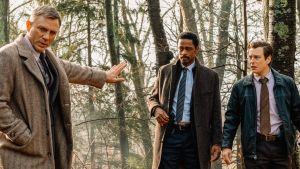 The action revolves around the southern-fried vowels of Daniel Craig

Fifteen years ago, I met a nice young man called Rian Johnson who’d just directed Brick, an excellent noir pastiche set in an archetypal American high school. A great amount of life has come his way during the intervening years.

The natural follow-up to Brick — a heightened variation on the big-house whodunnit — comes after Johnson has been lauded and derided for his work as master of the Star Wars universe. The delightful, energetic, empty film plays like a holiday from that madness, but there a few allusions to the downside of franchise celebrity.

But Knives Out is, for the most part, as segregated from the real world as the location — a mansion in Addams Family gothic — is segregated from its surrounding community. Nobody will mistake it for Kenneth Branagh’s recent, spirit-sappingly unironic Murder on the Orient Express. It’s closer to one of those Star Trek episodes in which they find themselves on a planet fashioned from the tropes of 20th-century popular culture. But better than that suggests.

It is hardly worth summarising the plot. Suffice to say Christopher Plummer plays a frightful mystery author — more nods there to the meta-setting — whose murder heightens disputes among an equally appalling family. Chris Evans is a smug, irresponsible grandson. Toni Collette is a bitchy daughter. Michael Shannon is subsonic as the heir to the fortune. Don Johnson, Jamie Lee Curtis and Ana de Armas are among the many others along for the ride.

The action revolves around the southern-fried vowels of Daniel Craig as the confident, unflustered Benoit Blanc. Clearly savouring a few weeks away from Bond Towers, Craig does enough work to make a viable Golden Age sleuth of the character. Any more personality and he’d be not unreal enough.

Directing his own screenplay, Johnson knows that the trick here is to pile the revelations on so rapidly that audiences have no time to notice the thinness of the structure. Revealing genuine affection for genre, decorating the action with brown wood and rep-theatre costumery, he makes no concessions to safety in his vigorous hammering of the accelerator. It’s over before you have time to question the logic. Great fun.