New this week: A Star Is Born, Tehran Taboo, Columbus, Under the Clock 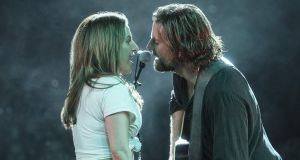 Star power: Lady Gaga and Bradley Cooper in A Star Is Born

A STAR IS BORN ★★★★★
Directed by Bradley Cooper. Starring Bradley Cooper, Lady Gaga, Sam Elliott, Andrew Dice Clay, Rafi Gavron, Dave Chappelle, Rebecca Field, Michael Harney, Shangela Laquifa Wadley. 15A cert, general release, 135 min
A triumphant return to an indestructible Hollywood warhorse. Gaga exceeds all expectations as the talented working-class ingenue propelled to fame by Cooper’s soused rocker. Leaning into the male lead like a bird investigating promising movements among the undergrowth, she is exotic when she’s ordinary and rooted when she’s fantastic. Cooper is equally strong – browned to the colour of yesterday’s tea – as a decent man laid low by addiction. The music is great. The nimble camera-work is a pleasure. What’s not to like? Full review/trailer DC

Everyone is trapped and on the verge of ruination in this German-Austrian rotoscoped animated feature. Intersecting stories play out in the sprawling metropolis of the title: Pari, a woman with a young son who has been forced into prostitution after her drug-addicted husband is sent to jail; Sara, her pregnant neighbour; and Babak, a talented young musician who has a one-night stand with a girl at an underground club, an encounter that forces them to explore backstreet medical options in the hope of “restoring” her virginity ahead of her upcoming marriage. Compelling. TB

It seems only fair that modern architecture – including Eero Saarinen’s Irwin Union Bank building and the Miller House and IM Pei’s Cleo Rogers Memorial Library – takes centre stage in debuting writer-director Kogonada’s carefully calibrated, minimalist drama. Taking cues from the clean, unfussy lines of those constructions, Columbus concerns a book translator (Cho) who finds himself stranded in the Indiana town of the title, where he befriends an architectural enthusiast (Richardson). Could pass as an American remake of a hitherto undiscovered Yasujiro Ozu drama. TB

Nicell’s documentary, which is very much in the style of oral collages such as His & Hers, goes among various Dubliners whose lives were changed by encounters outside Clerys department store on O’Connell Street. The film parts company from the clock early on and makes only fleeting returns. This is a bit of a shame. It would be nice to get more on the atmosphere of O’Connell Street in earlier decades. But the film’s impressively unsentimental portrait of the wider nation offers many surprises. Full review/trailer DC

It’s 1992 and the long-suffering wife (Close) of a much-lauded American novelist (Pryce) travels to Stockholm, where her husband will receive the Nobel Prize for Literature. It’s a moment of triumph that unexpectedly leaves all parties reeling, with just a little prodding from a fanboy journalist (Slater, excellent) eager to write the author’s autobiography. Working from a clever script by Jane Anderson (Olive Kitteridge), Swedish director Runge’s film version of the 2003 Meg Wolitzer novel pivots around a subtle, inscrutable turn from Close, making her the bookies’ favourite to win the Best Actress Oscar next spring. Full review TB

The director of Room returns with a queasy, unclassifiable adaptation of Sarah Waters’s novel concerning a young doctor (Gleeson) caught up with a crumbling dynasty in postwar England. There has been some criticism of the distributors for flogging the film has a straight-up ghost story. That is in there. But The Little Stranger is more a drama about class, money and the British postwar rearrangement. A comparison with Brideshead Revisited would as useful as any with The Turn of the Screw. Full review DC