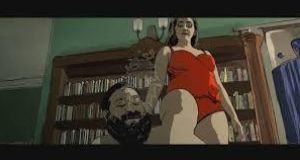 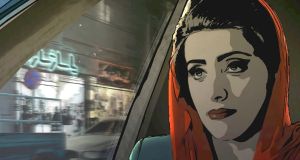 Late into this compelling rotoscoped animated feature, a poor man bemoans the fact that he cannot pay for his daughter’s abortion before bashing a bag of newly born kittens against a dumpster. He pauses for a moment as he dumps his unfortunate cargo: “I wish I was you,” he says.

In Ali Soozandeh’s drama, everyone is trapped and on the verge of ruination; and – as the presence of the morality police and the spectacle of public hangings from cranes reminds us – ruination spells jail or death.

Intersecting stories play out in the sprawling metropolis of the title, a place rife with sexual hypocrisy. Pari (Elmira Rafizadeh), a woman who has been forced into prostitution after her drug addict husband was sent to jail, is introduced giving oral sex to a client as he drives down a busy Tehran street. Her mute son, Elias (Bilal Yasar) is in the back seat when the car comes to a screeching halt. The furious driver has seen his daughter with a man.

At the Islamic Revolutionary Court, the iron-willed Pari meets the judge who, in return for sex, gives her and her son an apartment. She soon befriends the neighbours, including the delicate Sara (Zara Amir Ebrahimi), who is pregnant after two miscarriages but keen to get back to teaching (and away from her in-laws). Her banker husband (Mohsen Bayram) insists that she remains at home.

Elsewhere, Babak (Arash Marandi), a talented young musician, has a one-night stand with a girl, Donya (Negar Mona Alizadeh), at an underground club, an encounter that forces them to explore backstreet medical options in the hope of “restoring” her virginity ahead of her upcoming marriage.

A film of mounting tensions and inevitable tragedies, as with Marjane Satrapi and Vincent Parranoud’s similarly-crafted Persepolis, this German-Austrian co-production is a film that could only have been made by an Iranian artist outside Iran. Actors were accordingly filmed on green screen and Tehran was added later.

Bustling tableaux and affecting performances tease out the contradictions of a city where a mobile phone can be used to reinforce archaic laws.