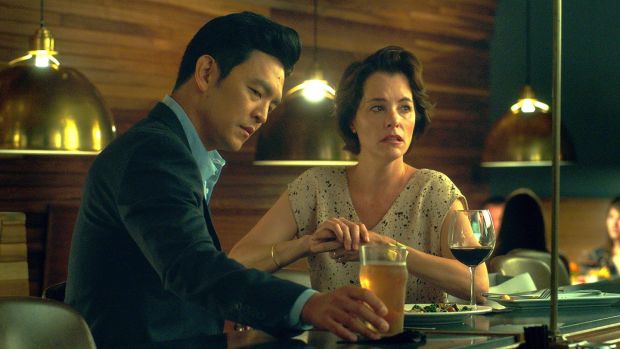 It seems only fair that modern architecture – including Eero Saarinen’s Irwin Union Bank building and the Miller House and I M Pei’s Cleo Rogers Memorial Library – takes centre stage in debuting writer-director Kogonada’s carefully calibrated, minimalist drama. Taking cues from the clean, unfussy lines of those constructions, Columbus concerns a book translator named Jin (John Cho) who finds himself stranded in the Indiana town of the title after his distant father, an architecture professor, is hospitalised in a coma.

Jin strikes up an unlikely friendship with architectural enthusiast Casey (Haley Lu Richardson), a young woman whose hopes of studying architecture have been hindered by concern for her mother (Michelle Forbes), a recovering drug addict. Both parties have other friends: Jin frequently confides in his father’s colleague (Parker Posey) while Casey bounces of a brilliant doctoral student named Gabriel (Rory Culkin). But it’s the moving relationship between Jin and Casey that stealthily ushers in life-changing lessons.

A tremendous troupe of actors work in mostly delicate movements in a film that could pass as an American remake of a hitherto undiscovered Yasujiro Ozu drama. In keeping with the milieu of the Japanese master, pillow shots – often featuring architectural details – become a subplot in their own right. Elisha Christian’s cinematography (the camera is often trained on mundane things) is never less than ravishing.

Arriving hot on the heels of the box office sensation, Searching, Columbus leaves one to ponder why it has taken so long for directors to realise that the Jon Cho is a versatile, charismatic leading man. His screen partner, the blazing Haley Lu Richardson, wrings everything from her best-written role since The Edge of Seventeen. The scene they share together on a covered bridge makes for a remarkable, smarting trade-off, a rare moment of emotional pyrotechnics in a stately, hypnotic picture.