Review: Even in death, the enigmatic designer has evaded the documentarians

The official trailer for 'McQueen', a documentary focusing on the life and career of the late fashion designer Alexander McQueen. Video: Bleecker Street 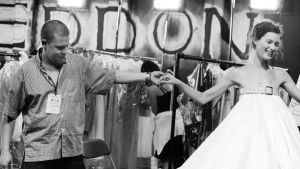 Alexander McQueen in the 'McQueen' documentary: the fashion designer had a profound need for privacy

On the night that fashion designer Alexander McQueen took his own life in 2010, his long-time collaborator and friend Mira Chai Hyde felt a presence in her room.

It sounds unlikely, and yet, watching this well-crafted biographical documentary, one can empathise. The filmmakers have properly scoured the archives in search of their subject, and yet McQueen remains a ghostly, unknowable presence throughout.

It’s complicated. When the queer, working-class, Stratford-raised artist first emerged in the London fashion scene, he needed to stay incognito as he was still drawing the dole. But, year after year, his apparent reluctance – as he was dragged out on to catwalks during various fashion weeks – suggests a profound need for privacy.

It wasn’t that McQueen was entirely coy about being in the public eye. He had many celebrity chums, he was openly gay his entire life, and he was, as evidenced by his notorious 1993 Highland Rape collection, capable of broaching such terrible family secrets as the sexual abuse visited upon him and his sister by a brother-in-law.

He once said that if you want to know me, look at my work, and Bonhôte and Ettedgui have taken him at his word, dividing the film into chapters named after different fashion collections.

There are excellent, illuminating contributions from Hyde, from assistant designer Sebastian Pons, and from art dealer Detmar Blow, the widower of McQueen’s former mentor, Isabella Blow, as the film outlines and teases out the biographical details.

The designer did not, as is often reported, grow up in a council flat. His mother Joyce was a teacher, his Scottish father Ron was a taxi driver, and he attended a postgraduate course at Central Saint Martin’s College of Art and Design thanks to a £4,000 loan from his Auntie Renee.

Aged 16, he had trained under the Cork-born coat-maker Cornelius O’Callaghan on Saville Row. There was a stint with the imprint Red or Dead, where fellow-designer John McKitterick recalls an enthusiastic, never-late youngster who listened to Sinead O’Connor obsessively, and a brief relocation to Milan to work under Romeo Gigli, a taskmaster who inspired McQueen’s life-long love of sewing insulting, sweary messages into garment linings.

Returning to St Martin’s, McQueen’s eye-catching gradation collection – Jack the Ripper Stalks His Victims – established his credentials as an enfant terrible and brought society benefactor, Isabella Blow into his life.

Blow becomes a narrative plank for the film. When McQueen is improbably installed as the creative director of Givenchy, he turns his back on his former protector, a snub that may have contributed to Blow’s suicide in 2007. He and Irish milliner Philip Treacy, another Blow protégé, dedicated McQueen’s La Dame Bleue spring 2008 collection to their late mentor.

It’s clear that the death of McQueen’s mother – the woman who had encouraged him to seek an apprenticeship on Savile Row, who had inspired his Scottish designs with her keen interest in the family’s Scottish genealogy, and who died a week before his suicide – was a far greater influence.

There are interesting details to be gleaned from this elegant film. McQueen had said Givenchy was a “load of crap” before he was appointed as their creative director, he created his 55-outfit Givenchy debut, The Search for the Golden Fleece, in just 25 days, and he loved his dogs dearly (he left £80,000 in his will to ensure they were looked after).

But there are also gaping omissions. The filmmakers have very wisely eschewed a celebrity-heavy format wherein Anna Wintour and her ilk use the word “genius” repeatedly, in favour of intimate chats with family members.

Sadly, this means there’s no meaningful conversation about McQueen’s early star-making collaborations with David Bowie and Bjork, and there are no contemporary contributions from patrons Lady Gaga, Nicole Kidman, Sarah Jessica Parker or Rihanna.

Worse, there’s no mention of the designer’s late, unofficial husband George Forsyth. Indeed, McQueen’s sexuality is almost glossed over, save for a reference to Leigh Bowery’s Taboo club. Nor are there any awkward questions as to how the industry failed to spot McQueen literally shrinking from cocaine use, paranoia and pressure.

Even in death, it seems, the enigmatic McQueen has evaded future documentarians.