Review: Super Troopers belong to 2001, when Linkin Park were big and Clinton was president 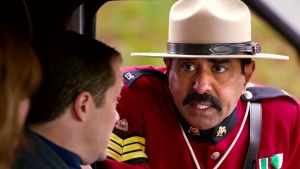 Sorry, I didn’t order this. Did anybody else at the table order this? The first Super Troopers film debuted so long ago that, as his reward for delivering a hit, director Jay Chandrasekhar got to make that Dukes of Hazzard reboot you’d also forgotten about.

It was the summer of 2001. The hot sounds of Linkin Park were tearing up the charts. American audiences laughed as the Broken Lizard comedy troupe did something or other that has since faded almost entirely from consciousness.

Happening upon them again is like encountering a pair of trousers that you’d discarded during the Clinton administration. You need to wear them out to remind yourself what you didn’t like about them.

Oh, yeah. The current film is almost entirely concerned with jokes aboot [sic] the cultural distinctions between Canada and the US. The eponymous former Vermont coppers – now cast to the wind – reunite to police a sliver of the US’s northern neighbour that is about to become part of the Green Mountain state. Cue endless chatter aboot [sic] the metric system, the weakness of American beer and the word “about”.

Every now and then, the Super Troopers veteran will hear a faint bell as he or she is reminded of some supposed selling point of the earlier film. Yes, Brian Cox (the actor rather than the only marginally less likely astrophysicist) was in that picture and, never one to repulse a cheque, he turns up as the least annoying character in the new film. Lynda Carter is barely in it.

Rob Lowe appears as a character who may be modelled on Justin Trudeau, but who, with his shaggy centre parting, more vigorously suggests Gary Johnson from Team America: World Police.

So, the film is both terrible and inexplicable. It is not, however, entirely without merit. No actor is irredeemably bad and it does offer a stirring argument for the resilience of the human spirit.

Though released by Fox Searchlight, Super Troopers 2 owes its existence to $2 million in seed funding raised by dedicated Broken Lizard fans. There are worse ways of wasting your money. I can’t think of one right now. But there are.