All the Wild Horses: ‘The Great British Bake Off’ on horseback

Review: No one in this documentary seems easy company, but it could become cult viewing 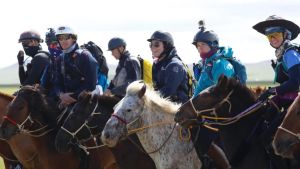 Riders line up at the start of the 2017 Mongol Derby in Mongolia. Photograph: Julian Herbert.

Film Title: All the Wild Horses

We need one more film on a seemingly insane race across barmy distances to confirm the emergence of a pattern. Following closely on last year’s Road to Sparta – set amid Greece’s gruelling Spartathlon – Ivo Marloh further cranks up the pressure with a study of the even-less-explicable Mongol Derby.

Drawing inspiration from an early version of the Pony Express established by Genghis Khan, the world’s longest horse race sends competitors across 1,000km of gruelling Mongolian terrain. It’s a sort of relay. After each stage, the rider changes to a different semi-wild horse and trusts that he or she won’t be thrown by that mount, struck by lightning or eaten by wolves.

There are no great innovations in All the Wild Horses. The camera crew does not intrude on the action. The footage is, reasonably enough, cut in such a way as to highlight crises and downplay dogged application.

But the sheer lunacy of the subject and the fierceness of the competition make for compelling watching.

The structure is essentially that of The Great British Bake Off (but with more fractured vertebrae). We are swiftly introduced to a variety of competitors and, having picked our favourite, follow them anxiously through the various trials.

Domestic viewers will find themselves drawn to Irish riders Donal Fahy and Richie Killoran. Furiously stubborn, but still sportsmanlike, they are the only entrants likely to call an awkward beast a “f**king dickhead”.

It hardly needs to be said that none of these people seems like easy company. One vomits her way into advanced heat exhaustion. Another breaks their neck after acquiring a particularly unhelpful horse. Those levels of determination are rarely compatible with an easygoing temperament.

If the film has an internal agenda it is to press home the organisers’ concern for the horses. No beast is allowed to race until its heart rate decreases below a safe level. Before the race featured in the documentary, some 8,000 rides had been completed without a single equestrian fatality. “The only abuse is human abuse,” one official jokes.

Masochism is certainly part of the appeal here, but Marloh and his team ratchet up real tension in the later stages. This is one of those uncomplicated documentaries on a fascinating subject that could generate a cult.