Seána Kerslake: ‘The red carpet is not my favourite place’

The Tallaght actor might have to get used to it, as her star quality shines in The Hole in the Ground 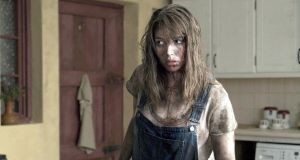 I’m guessing Seána Kerslake is used to being the centre of attention. A Date for Mad Mary was a smash in Irish cinemas. Can’t Cope Won’t Cope, made for RTÉ, is now streaming on Netflix. She spent time at the Old Vic in Joe Penhall’s Mood Music. She is surely blasé about the circling hordes.

“God, no! Though maybe my family will say otherwise,” she yells. “It’s hard to put yourself at the centre of attention. It’s fine in the actual job. It’s great being here in the room with you. That’s perfect. But the red carpet is daunting. That’s not my favourite place in the world. But it’s part of the job and if it means I get to do what I want to do, then fine.”

She’s just recovering from a cask-strength slug of publicity. Lee Cronin’s fine horror The Hole in the Ground – starring Kerslake as a young mother avoiding malign entities in the Irish countryside – played to great reviews at the Sundance Film Festival. Even before it landed in Utah, the picture had sold to powerful US indie distributors A24.

Going to Sundance was mental. When you’re there you’re trying not to get caught up in the anxiety. It’s only now I realise I was at a really cool festival in a really beautiful place

“Going to Sundance was mental,” she says. “I am now only getting to decompress and realise what an experience it was. When you’re there you’re trying not to get caught up in the anxiety. It’s only now I realise I was at a really cool festival in a really beautiful place.”

It feels a bit patronising to say Kerslake seems unchanged by the recent acclaim. But she really does bubble with unpretentious bonhomie. Dressed in a crisp white blouse, her hair straight and highlighted, she seems to be actually enjoying the conversation. More power to her.

Kerslake, who is 28, grew up as part of a busy family in Tallaght. Mum and dad enjoyed going to the theatre, but the only actor in the family seems to have been a granddad who enjoyed am-dram.

“I was always performing with my cousins,” she says. “We did an annual show at Christmas time for the adults. We’d prepared it all year and they’d have to watch it. It was never ready by Christmas, but we still did it. They are going to come tonight and that’ll be a treat for them.”

And she rehearsed properly for The Hole in the Ground and everything.

“Yeah, that’s the pay-off for them,” she cackles.

Kerslake had it in her head that she might become an actor, but – a sensible sort – she studied music and drama at Maynooth with a plan to teach if it didn’t work out.

“It was a fallback,” she says. “But I don’t know how much I believe in that. I think if you want to do something, then go gung-ho for it. I’d be an awful teacher.”

When not studying for her degree, she snuck into Dublin to avail of the services at The Factory on Bow Street. This was the busy collective that invited actors to draw inspiration from such talented young directors as Lance Daly, John Carney and Kirsten Sheridan. Kirsten eventually cast Kerslake as the lead in her loose experimental drama Dollhouse and she was away.

“They cast Dollhouse from boxing clubs, from schools,” she remembers. “In Ireland we are very open to on-street casting or open calls. Other places in the world aren’t. You don’t have to have four years of training to do it.”

It was, however, Darren Thornton’s A Date for Mad Mary in 2016 that really made her name. Every review swooned at her funny, touching turn as an ex-con trying to connect with old pals. In the same year she was cast as Aisling in the wild comic TV series Can’t Cope Won’t Cope. That led to a role at the Old Vic opposite Ben Chaplin in Mood Music. All of those roles offered challenges, but taking on a major part on the London stage for director Roger Michell sounds particularly intimidating.

“It was amazing,” she says. “Working with Roger Michell, David Arnold, all those amazing people. I was lucky in that I got to work with Druid right before and that really helped. Roger gave [Druid founder] Garry Hynes a call and – because I had no formal training – he was just checking: ‘Can she manage at the Old Vic?’ Ha ha! But having had that experience was great.”

She has continued to prioritise theatre. At the end of last year she appeared in Stephen Jones’s Northern Lights in Karl Shiels’s tiny Theatre Upstairs above a pub on Eden Quay. That reveals her passion for the business.

“Someone like Karl Shiels at the Theatre Upstairs has no notions,” she says. “You won’t get far in this city if you have notions about yourself. Good people like that keep you grounded.”

Kerslake is not in a position to say too much about what is coming next. She admits that, once or twice in the past, she has announced projects that never came to fruition. But she already has the sort of fame that helps gets films made and helps plays draw crowds.

“Can’t Cope Won’t Cope is enormous because it’s on Netflix,” she says. “People will catch you in a bathroom and tell you they’ve watched it. I was doing Northern Lights and a Canadian guy came up and said: ‘Netflix!’ You never know who’s seeing you.”

She flits between London and Dublin. Following Sundance, she spent a spell “taking meetings” in Los Angeles. I can’t see her being sucked up by the temptations of the Sunset Strip. Not for good, anyway. Kerslake will be always coming home.

“I am very much between London and Dublin,” she says. “But I always think of that James Joyce quote: ‘When I die Dublin will be written on my heart.’”

The Hole in the Ground is released on March 1st