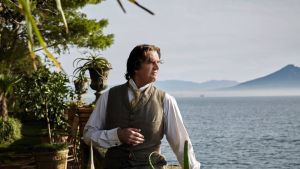 One of the challenges for Rupert Everett in his directorial debut – a study of Oscar Wilde’s last miserable months – was to escape the semi-fictional, pantomime version of the writer that has inspired a thousand awful one-man shows. You know the sort. A fat man in a floppy hat argues with customs officials about the status of his genius.

Dealing with a period more often treated as hurried epilogue, the star throws vanity to the seas as he plumps up and bloats out to worrying proportions.

There is some life left. Everett is bright enough to know that he can’t escape all the greatest hits. His Wilde does have something to say about the wallpaper (though not as last words) and he makes sure to note that he’s dying beyond his means.

These quips are, however, delivered with a wheezy desperation that signals the slow drawing down of the curtain. We really haven’t seen much of this version.

The film-making, packed with too many close-ups, allows only a few mad flourishes

Everett’s script juggles time while telling a story that will be already familiar to most viewers. We begin with him reading the sadistically sad The Happy Prince – a beautiful fairy tale about how bloody ghastly the world can be – to his children, and then move forward to the years after prison.

Oscar meets loyal pals Reggie Turner (a Colin Firth cameo) and Robbie Ross (Edwin Thomas) off the boat to France and then moves on to fin de siècle Paris. Later, he has an ill-advised tryst in Naples with his beloved Nemesis Lord Alfred “Bosie” Douglas (Colin Morgan). Death stalks.

There is no great revisionism at work. Bosie remains a selfish oik. Robbie Ross is again celebrated as the most loyal and non-judgmental of supporters. The film-making, packed with too many close-ups, allows only a few mad flourishes: a nice pastiche of a Renoir luncheon; a delicious floorboard-rattling turn from Béatrice Dalle as a cafe proprietor.

The Happy Prince does, nonetheless, mark out new territory in its willingness to probe Wilde’s final weakness and fragility. You can smell the decay.

‘Frederick Douglass and Ireland: In His Own Words’: A compelling account of a historic moment
9