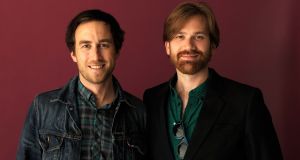 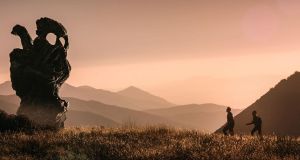 The Endless: science-fiction horror ‘makes absolute sense if you apply yourself’

Meeting Justin Benson and Aaron Scott Moorhead, you are reminded that it requires organisation and discipline to maintain a life in low-budget cinema. An old Evil Dead T-shirt, your mother’s credit card and last year’s camera phone will only get you so far. Benson and Moorhead, handsome men in their mid-30s, have directed three ornate science-fiction gems on implausibly modest budgets. Their latest, an essential conundrum named The Endless, sends two brothers back to a cult they escaped a decade earlier. Stuffed full of ideas, decorated with wild visual flourishes, the picture is both a logistical and metaphysical marvel. But the two Americans refuse to mythologise its production.

“Our films are shockingly smooth. They shouldn’t be. As you say, they are big elaborate films made for no money,” Moorhead tells me. “I’d love to have terrible stories for you: huge, torrential storms shut down the show and we had to make it with three toothpicks and an iPhone. We don’t have those stories because we are so dedicated to planning and working within our means.”

There is a boring truth here. Romantic Herzogian chaos is all very well, but life on set is less stressful if you stick to a schedule. The results are striking and puzzling in The Endless.

When the two principals, played by the directors, return to their old protectors – or abusers or captors – in Southern California they get swallowed in a cyclical whirl of confusion. If you want some sense of the science-fiction head-stretching then think of Shane Caruth’s equally captivating Upstream Colour from a few years back. Like Carruth, Aaron affirms that the story makes absolute sense if you apply yourself.

“Actually in our heads the movie is distinctly linear and clear,” he says. “But as it’s a mystery we give it out in data points. There is a very clear explanation for everything you see in the film. It’s not the viewer’s fault if they don’t pick up on all of them on the first view. It’s a lived-in world that you walk into that isn’t going to feed you all the answers.”

We can only give a flavour here of what Moorhead is getting at. The remaining cultists don’t seem to have aged. One member stands alive beside his own hanged body. Ghostly hemispheres manifest themselves in the desert. Three moons appear in the sky. Despite the directors’ assertion that there is one unshakable meaning, it’s the sort of film that’s sure to generate wild speculation. I’m certain they heard plenty of oddball theories while touring the festival circuit.

“Not really,” Benson says. “We have made three movies that have a mystery component. We test them by sending out a screener. If they can tell you roughly what’s happened you’re on the right track. If five per cent say ‘I’m lost’ and five per cent say ‘It was too obvious’ then that’s about right. The wildest interpretation we had was a woman in Philadelphia asking Aaron if the film was a documentary.”

“I was going to bring that up if you didn’t,” Moorhead chips in.

“We strive for naturalism but we never thought it would work that well,” Benson  responds. “Somebody in Paris said: ‘The three moons symbolise that’s your third movie.’ What a narcissistic meta-joke that would have been. But we haven’t had many takes that were so far off.”

The two film-makers grew up on opposite sides of the United States – Benson in San Diego, Moorhead in Florida – before meeting up as interns at Ridley Scott’s commercial production company RSA. It sounds as if, like characters in their own weird movies, they lived parallel lives, driven and connected by shared enthusiasms and preferences. They even look eerily alike: clean-cut, even features, all-American gleam.

“When we grew up we watched and made a lot of movies,” Moorhead says. “That was an all-in experience. There was no cinematographer. There was no sound guy. Everyone did everything. So going to film school and then meeting Justin that feeling never went away.”

I glibly suggest that working for RSA must have been a whirl of glamour. That’s how we imagine the advertising industry. They were, I’m sure, directing wind machines at Naomi Campbell and blowing fog around Justin Timberlake’s ankles. Nobody ever complained about that world being too drab.

“I wish that were true,” Benson says.” We were interns. We never got to meet Ridley Scott. We never did anything important. We got people’s mail and we maybe cleaned something at some point. We met there and made cheap spec commercials together in the hope somebody would ask us to direct a real one. We made a few short films.”

He goes on to explain an interesting shift in the business. Sir Ridley (as he then wasn’t) was among the first to lay out a route from television commericals to mainstream film-making. A later generation moved from pop videos into feature cinema. Benson and Moorhead found it easier to raise the funds for a low-budget movie than to secure work on commercials. They feel the process is going into reverse.

Their first picture, Resolution, set in the same universe as the later The Endless, premiered at the Tribeca Film Festival in 2012 and went on to secure rave reviews and generate excellent returns. The eerie, unique Spring – let’s call it a Lovecraftian, walkie-talkie romance – was equally well recieved in 2014.

Hollywood is hungry for this sort of talent these days. New Gods such as Colin Trevorrow, director of Jurassic World, and Rian Johnson, who made Star Wars: The Last Jedi, emerged from the world of low-budget, independent cinema. Sure enough, Benson and Moorhead were soon being courted by all the big studios.

Moorhead explains that, before they launched into The Endless, they were juggling sheaves of TV scripts and bricks of offers for mainstream features. But they remain true to their roots.

As you might expect, Benson and Moorhead can’t chat much about the films and series they have in development. But they can reveal that a TV project concerning Aleister Crowley – the English occultist known to followers and opponents as “The Beast” – is moving  towards production.

“We can’t talk about the details,” Aaron says. “But we can say that it’s something that his followers might not like, but Crowley himself would love.”

There are four features on the go. Some are enormous. Some are a little more manageable. If one stalls, then they shift attention to another.

“Life is very long,” Moorhead says. “And we are going to make all of these things.”

That’s something else you need in this business: optimism.

The Sound of my Voice (2011) Brit Marling stars as the head of a cult who claims to have travelled from the year 2054. Complex, socially aware drama from Zal Batmanglij, director of the tonally similar The East.

The Blood on Satan’s Claw (1971) Or a dozen other British folk horror films about sinister movements that drive citizens to ritual murder. Equally as good as the contemporaneous The Wicker Man, but even stranger.

Maureen Flavin, the Mayo weather woman who made D-Day work
8