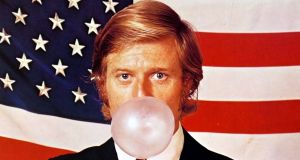 Robert Redford in ‘The Candidate’

It’s sometimes hard to tell if a successful actor has retired. One day, you turn around and think: when was Jack Nicholson last in a film? (If you’re actually wondering, it was James L Brooks’s tepid How do You Know from 2010.)

They may never confirm the fact. They may suddenly turn up again after a decade in the Jacuzzi. (More on Nicholson in a moment.) If the role is good enough almost any actor can be tempted back to the set.

Robert Redford has, however, confirmed that he is retiring. Sort of. Maybe. Most likely.

Now 81, the great man tells us that David Lowery’s much anticipated The Old Man and the Gun – a silver-fox crime drama co-starring Sissy Spacek and Tom Waits – will be his final film. Or so he almost claims. “Never say never,” he said.

“But I pretty well concluded that this would be it for me in terms of acting, and [I’ll] move towards retirement after this because I’ve been doing it since I was 21. I thought: Well, that’s enough. And why not go out with something that’s very upbeat and positive?”

Actors complain with justification that mainstream films tend to focus on young men and a few even younger women. Semi-retirement from movies was often forced on great actresses of the golden age. Bette Davis was only in her mid-50s when she was dragged from the shadows for What Ever Happened to Baby Jane? – itself an essay on the terrors of the actor’s afterlife – and that success did not propel her back to real stardom. Many roles as maniacs followed.

That situation has improved somewhat. Grand dames such as Maggie Smith (83), Judi Dench (83) and Vanessa Redgrave (81) still get parts with juice and nuance. Earlier this year, Christopher Plummer (88) became the oldest acting nominee ever at the Oscars with his nod for All the Money in the World. There are senior parts for those actors at the top of the profession.

“I think it has improved for older actors,” Sheila Hancock (85) told me recently. “I think the soaps have done a lot for that. There are wonderful parts for older women.”

Dench has made it clear that, despite fading eyesight, she will not be giving up anytime soon. “I don’t want to be told I can’t do something,” she says. “I’ll just have a go at it and I may make a terrible mess of it but I’d sooner make a mess than not have a go at all. I don’t think age matters at all.”

So why do sought-after actors give it up? In the case of Daniel Day-Lewis, who recently retired at the sprightly age of 60, it seems that the job was never exactly fun. He famously broke down on stage when playing Hamlet at the National Theatre in 1989 and has yet to return to the theatre. His decision to quit altogether came after a playing a fanatical fashion designer whose excesses make life hell for family and lovers in Paul Thomas Anderson’s Phantom Thread.

“Before making the film, I didn’t know I was going to stop acting,” Day-Lewis said. “We didn’t realise what we had given birth to. It was hard to live with. And still is.” You must make of that what you will.

Cameron Diaz, a very different actor, seemed to confirm that she was throwing in the towel last year. The conversation began with Selma Blair saying that her costar from The Sweetest Thing, was “done” with acting.

Blair retracted. Diaz then retracted her friend’s retraction. “I’m totally down. I’m semi-retired, too, and I am actually retired, so I would love to see you ladies,” she said (somewhat confusingly).

The news prompted much speculation on Hollywood’s continuing inability to cope with women growing up. For all the senior success of the Denches and Smiths and middle-aged success of the Blanchetts and Streeps, a kind of involuntary retirement is still often imposed on mid-ranking female stars who aren’t permitted to make the generational shift.

Some superstars turn their voluntary invisibility into mystique. Among all the movie anniversaries this year, few have noted that a perfectly decent comedy called With Six you Get Eggroll has attained its half-century. This is (or should be) notable because it was the last theatrically released feature starring Doris Day.

Now 96, Day was among the biggest stars of the 1950s and the early 1960s. Her attempted retirement was interrupted when, on the death of her husband Martin Melcher in 1968, she discovered that he had left her practically bankrupt and had committed her to a TV show. “I was really, really not very well when Marty passed away, and the thought of going into TV was overpowering,” she said. Day rallied. The Doris Day Show was a hit. She clawed back her wealth and then properly retired to take care of animals and remotely enjoy the status of living legend.

Nobody better exemplified the creative retirement than Greta Garbo. She is most famous for films such as Grand Hotel, Ninotchka and Camille. She is almost as famous for remaining unavailable to the public for the last 50 years of her life.

“I want to be alone; I just want to be alone,” her character said in Grand Hotel. It’s hard to think of any other actor whose most famous line so accurately sums up her relationship with the industry (though Arnold Schwarzenegger will almost certainly be “back”). Essentially, Garbo hated everything about the business except the acting itself. She was seen walking about New York in later years, but she never gave another interview.

Garbo and Day Lewis are in a minority. Most actors will, if given the chance, batter their way to the camera or the footlights until some vital part of the equipment gives in.

Though still as dryly amusing as ever, Michael Gambon has had to give up stage work because he can no longer remember the lines. Sources said that Jack Nicholson’s apparent retirement was also due to memory loss.

Hold the phone. Early this year, it was confirmed that Jack is still planning to star opposite Kristen Wiig in a remake of Maren Ade’s Toni Erdmann.

So, when was Gene Hackman last in a film?