The Big Bad Fox and Other Tales: More for parents than kids 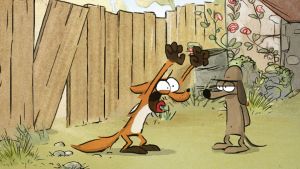 The Big Bad Fox and Other Tales

Film Title: The Big Bad Fox and Other Tales

I feel awful saying this. Maybe if I say it quietly nobody will hear. But this very pretty, reassuringly old-school animation feels like the sort of film that parents will enjoy more than their children. Worse still, it feels like something that parents will think their children should enjoy. Like David Bowie narrating Peter and the Wolf. Or adaptations of folk tales at our national theatre.

That’s probably unfair. The people behind the lovely French animation Ernest and Celestine have worked hard to bring three charming, anthropomorphic stories to the big screen. Each revolves around the characters in a rustic farm. Each has a friendly moral at its heart.

We begin with the “actors” greeting us beneath a proscenium arch as they prepare to work through the tales. It’s a confusing conceit that, once the narrative is up and running, is largely forgotten for a conventional approach. No matter. The first yarn finds a not very big, not very bad fox – whose amiable nature contrasts sharply with that of a lurking wolf – helping a useless stork to deliver her baby. The second puts the same fox in charge of a set of vulnerable chicks. The third, a Christmas tale, asks the animals to stand in for an apparently inconvenienced Santa Claus.

Benjamin Renner and Patrick Imbert’s animation has the feel of wistful watercolour. The animals are occasionally a tad stylised – the bun-like chicks in particular – but retain convincing traits of their real-life inspirations. The look is old-fashioned, but not quite so old-fashioned as some of the references. How many modern children will understand why a long-necked wading bird is delivering babies?

A less jarring – and more amusing – dissonance is kicked up by the collision, in this version, between very English voices and very French images. Adrian Edmondson, Bill Bailey, Celia Imrie and Phill Jupitus are a few of those making merry among les haricots. Oddly, only the very evil wolf is allowed to utter any French dialogue. Make of that what you will.