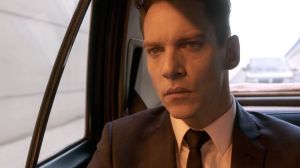 All kinds of aphorisms are enlivened by Jonathan Rhys Meyer’s turn.

Spies don’t do spy stuff in spy movies anymore. If they are James Bond, they attempt to prevent huge CG explosions. If they’re Tom Cruise, they go base jumping.

So there’s something pleasingly old-school to see an espionage drama that opens in West Germany in 1989. Jonathan Rhys Meyers’s Ari Ben-Sion is the real deal, too. He’s suave. Calculating. Cool. Brutal when required.

Ari is an Israeli secret agent who is recalled to Tel Aviv for debriefing after a job in Berlin goes wrong. Mossad handler Miki (John Hurt) dispatches Ari to Syria, where, in the guise of his German alter-ego, he has to smuggle a chemical weapons scientist back to Israel.

This soon proves problematic. Might the recent death of his young son be affecting his aptitude for cloak-and-dagger shenanigans? He does keep misting up whenever he sees a similarly-aged boy. Might his relationship with Kim have weakened Ari’s spy skills even further? And can Miki be trusted?

These and other questions are slowly answered by Daniel Zelk Berk’s predictable low-key drama as it plods toward a muddled solution. (Seriously, if you don’t spot the twist coming at the hour mark, then you’re not allowed to watch movies anymore.)

Clanging dialogue (“Tell me your deepest, darkest secret”) and all kinds of aphorisms are enlivened by Jonathan Rhys Meyers’s turn which, if nothing else, doubles as a solid audition tape for Barbara Broccoli. Cinematographer Chloë Thomson adds interesting framing and genre-appropriate overhead shots. There are a few decent car chases and bouts of fisticuffs. There are honest-to-goodness Nazis. But, in common with the (almost) Cold War setting, it feels like a film that’s out of time. Damascus Cover might once have filled a gap on the release schedule between Funeral in Berlin and The Ipcress File, but it’s an odd, under-powered film to pop up in the age of Jason Bourne. Not even John Hurt’s last screen appearance as the wily Miki can bring this one in from the cold.