It’s a bird, it’s a plane . . . it’s a fun, self-referential animated romp through the DC universe 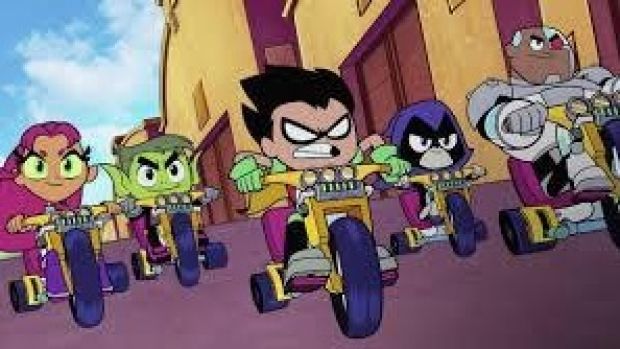 In 1998, Superman Lives, a reboot based on the Death of Superman comic, written by Kevin Smith, directed by Tim Burton, and starring Nicolas Cage as the Man of Steel, fell apart three weeks before filming was scheduled to begin. The abandoned project remains one of the movieverse’s most intriguing what-ifs and was the subject of a 2015 documentary, The Death of ‘Superman Lives’.

More than 20 years later, film fans can finally see Nic Cage’s Superman, albeit in animated form, in Teen Titans GO! To the Movies. He’s rather good actually. So that’s that cleared up.

Now, what would Michael Bolton look and sound like as a rainbow-riding cartoon tiger singing an inspirational 1980s-style pop tune? That’s rather good too.

For those of you who are unfamiliar with the gloriously silly comics and animated TV series, the Titans comprise Robin (Scott Menville), Raven (Tara Strong), Beast Boy (Greg Cipes), Starfire (Hynden Walch), and Cyborg (Khary Payton), the “other guys” of the DC Extended Universe (DCEU). As their first feature film opens, the gang are too busy rapping about their own brilliance to stop the gigantic, marauding Balloon Man who is smashing up the city. Superman (Cage) cautions them to stop goofing around. Other Justice Leaguers note that real superheroes have superhero movies. (“Well, it took a little while, but yeah,” adds Wonder Woman.)

Not to be outdone, Robin approaches DC auteur Jade Wilson (Kirsten Bell) – yep, in this wacky cartoon world, women direct Batman movies – in the hope of getting a Titans spin-off. The gang also double their efforts to court an arch-nemesis in the form of Slade (Will Arnett). But all is not as it seems in the DCEU.

As with Lego Batman, Teen Titans Go! is as fun and self-referential as the DC action films are ponderous. The jokes come thick and fast. The satirical songs (by Jared Faber) are lively. Stan Lee wanders in from the rival Marvelverse for a couple of cameos. Superhero nerds will delight in appearances from Silver Age Aqua Man (complete with dolphin chum) and the Challengers of the Unknown. Mainstream viewers can get on board with ridiculous reprises of the Joker’s Dark Knight pencil trick and Marlon Brando’s turn as Jor-El.