Ant Man and the Wasp: unapologetically goofy. That will do nicely

Ant-Man and the Wasp - official trailer. 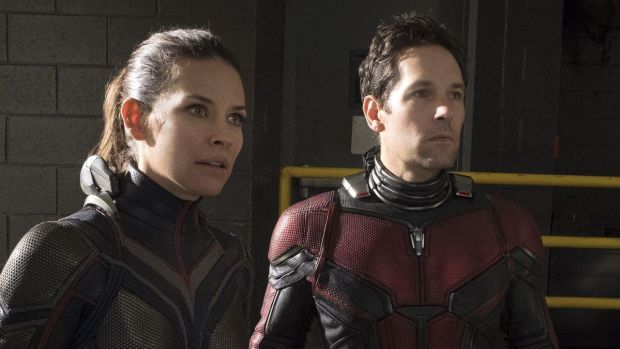 If we’re going to compare the Marvel Comics Universe to a continuing banquet – and it seems we are – then the Ant Man films count as the least threatening, least calorific of the many courses. Indeed, they are so inconsequential we need to place them in some other category. They are the finger bowls. They are the hot towels. Will that do?

We need our palate cleansed after the apocalyptic house party that was Avengers: Infinity War. As the dust clears and the grieving widows (Black or otherwise) are wrapped in their weeds, the tiny man and his tiny friends offer something zestier for the later summer.

Demanding some chronological jiggling from its audience, Ant-Man and the Wasp actually stands as a sequel to 2017’s Captain America: Civil War. That was the one that ended with an eight-hour punch up in a parking lot after Cap fell out with Iron Man.

As you may recall, Scott Lang (Paul Rudd), the current Ant Man, ended up on the losing side and, as we enter the post-bellum period, he finds himself under house arrest with his daughter Abby in a picturesque corner of San Francisco. They construct elaborate universes out of cardboard. They manoeuvre the everyday problems of family life. Ant Man and the Wasp is, after The Incredibles 2, the second best superhero-as-househusband movie of the summer.

Anyway, that can’t go on forever. Before we’ve had time to settle into out seats, a confusing anthology of intertwined plots comes clattering down the chimney. Hank Pym (Michael Douglas), Ant Man Emeritus, calls round and explains that his wife Janet (Michelle Pfeiffer), Reagan-era Wasp, is still stranded in something called the “quantum realm” (the one place you can escape the Marvel Universe, I imagine). Hank and Janet’s daughter Hope (Evangeline Lilly), sitting Wasp, joins in the schemes to engineer a reunion.

Elsewhere, an irritated young woman called Ava Starr (Hannah John-Kamen) – only temporarily an antagonist, it seems – gathers the power to phase through matter and, now known as The Ghost, interferes with the team’s plan to acquire technology that will facilitate Janet’s rescue. Michael Peña is funny as a stupid hoodlum. Walton Goggins and Laurence Fishburne are in it too.

It hardly matters that it’s impossible to care about any of this. The entire Marvel enterprise has been constructed over narrative foundations so flimsy you half-expect each film to sink sickeningly through the floor before we’ve reached the final conflagration.

It matters a little that there’s just so much story that we scarcely have time for Ant Man to fight spiders with (to him) giant needles and sail across oceanic bathtubs on roomy soap-dishes. In short, not nearly enough of Ant Man and The Wasp is stolen from The Incredible Shrinking Man.

The constant chatter and working through of unsurprising revelations also bleaches out Evangeline Lilly’s contribution. It’s nice that Marvel have put a female character’s name in the title of a summer release. It’s a shame that – though smarter, funnier and much angrier than her formic partner – The Wasp still comes across as a glorified sidekick. An actor with a good line in abrasion, Lily deserves better opportunities in later Marvel extravaganzas.

Oh well. With all the overly pompous franchise movies cluttering up cinemas it remains a pleasure to sink into something so unapologetically goofy. Setting the film in San Francisco allows a series of deranged vehicle chases – sometimes taken in dinkies driven by our heroes – that suggest a hallucinatory version of What’s Up, Doc? The team have enormous fun when, while visiting a school, Ant Man becomes stuck as a three-foot version of himself. However, there’s not nearly enough of Michelle Pfeiffer, but her hoarse pizzazz still illuminates the closing sequences.

The lighter, throat-clearing Marvel episodes are – to return to our culinary analogy – a great deal more digestible than the over-stuffed showstoppers. Ant Man and The Wasp is not the equal of the hilarious Thor Ragnarok, but it never climbs too far up its own quantum realm. That will do nicely.