Return of the Jedi: Ewan McGregor to reprise role as Obi-Wan Kenobi 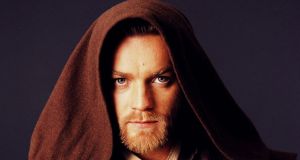 Disney has commissioned a big-budget series developing the adventures of the Jedi master.

Ewan McGregor’s eagerness to return to the role of Obi-Wan Kenobi, the character he first played in 1999’s The Phantom Menace prequel, has long been documented.

But it now looks as if his wish will come true, as Disney has commissioned a big-budget series developing the adventures of the Jedi master.

Originally, the studio had been planning a standalone movie for the character, but this evolved into a show – as was also the case for Boba Fett, subject of the forthcoming Mandalorian series.

This follows disappointing box-office returns for the standalone Han Solo film, and a refocus of efforts on the newly announced digital subscription channel.

Disney+ will launch on November 12th, with The Mandalorian one of the key debuts on that date.

Another Star Wars spinoff show – starring Diego Luna and Alan Tudyk reprising their Rogue One characters Cassian Andor and K-2S0 – is also in the works.

Plot and further casting details about the Obi-Wan Kenobi series have not yet been revealed.

McGregor played the character immortalised in the first trilogy by Alec Guinness in three prequels: The Phantom Menace (1999), Attack of the Clones (2002) and Revenge of the Sith (2005). He also made a voice-only cameo in Star Wars: The Force Awakens (2015).

Later this year, McGregor will star in Doctor Sleep, Stephen King’ssequel to The Shining, in which he plays the adult Danny Torrance.

Dancing with the Stars: public save rhythmless reverend Ray Kelly as Yewande Biala voted off
4

Netflix: 10 of the best new shows and films to watch in January
5

Tom MacIntyre: Writer who spoke to world from island off west of Ireland
9