New this weekend: Holiday, Blinded by the Light, Gaza, The Sun Is Also a Star 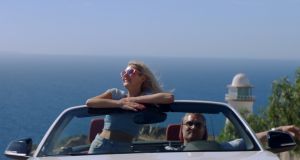 Dark of the sun: Victoria Carmen Sonne and Lai Yde in Holiday

HOLIDAY ★★★★★
Directed by Isabella Eklöf. Starring Victoria Carmen Sonne, Lai Yde, Thijs Römer
Top Austrian miserabilist Ulrich Siedl doesn’t do sexy seaside films, but if he did it might look like this thrilling, provocative tale of coercion, performative femininity, and sunshine. Sacha (Sonne), the ornamental girlfriend of a violent criminal kingpin named Michael (Yde), arrives at the port city of Bodrum on the Turkish Riviera. As a plaything, Sacha has little to do but sunbathe, float in the pool at Michael’s luxurious villa, and wander around the shops. The moment Sacha begins a flirtation with Thomas (Römer), tragedy seems inevitable. The terror unfolds in long, sunny shots that keep us guessing to her thoughts and motivations. Danish writer-director Eklöf, who co-wrote Border (another of this year’s best releases), has arrived with a bang. Club, Triskel, Cork; IFI, Dublin, 93 min TB Full review

A young man from a Pakistani family finds salvation in the music of Bruce Springsteen. Based on Sarfraz Manzoor’s memoir, Blinded by the Light is sentimental, implausible and laboured. It is also among the most irresistibly entertaining films of the summer. Chadha makes the best of an excellent cast: Kalra breaks through as the hero; Ghir is charming as his dad. What does most to banish cynicism, however, is the film’s effective communication of the feeling that one song can change the world. 12A cert, gen release, 117 min DC Full review

This beautifully shot documentary is careful with the details. Opening credits tells us that Gaza is a narrow strip of coastline bordered by Israel and Egypt, home to nearly two million Palestinians. The Islamic resistance movement Hamas has governed Gaza since 2007. Since then Israel has imposed a blockade and completely sealed its borders. Filmed between the Israeli war in 2014 and the border protests in 2018; the movie’s very existence is enough for some to dismiss it as propaganda or “manipulative and disingenuous”. That’s a shame, as Gaza studiously avoids direct political engagement, Final scenes bring us up to May 2018 and some of the bloodiest clashes in Gaza’s history leaving 60 dead protesters and 2,500 injured. It’s a tragic ending for an already sorrowful, moving film 12A cert, gen release, 92 min TB

The fast-rising Yara Shahidi plays Natasha, a young physics student fighting to keep her family in the country. While wandering about New York in a distraught daze, she bumps into a handsome Korean-American named Daniel (Melton). They end up spending what may be Natasha’s last day in the US enjoying the loveliest commercial the New York Tourism Board never made. It’s too glossy, it’s too contrived. But the stars make it work and the locations are to die for. 12A cert, gen release, 100 min DC

Avilés’ remarkable, rigorously researched debut concerns itself with the day to day rigours of working in a luxury Mexico City hotel. One of the film’s lesser pleasures is the detail it offers on how Eve’s job is done. The film is, however, most remarkable for its gentle teasing out of workplace relationships. This is not the worst job in the world, but its pressures clearly wear away at the soul. A gripping and oddly beautiful gem. Club, IFI, Dublin, 102 min DC Full review/trailer

Red (Sudeikis), the franchise’s heavily eyebrowed avian hero, is suspicious when his former porcine adversaries the Bad Piggies request a truce, but the showering of icy boulders suggests that pig and bird-kind have a common foe. Enter Zeta (Jones), the megalomaniac purple queen of hitherto undiscovered Eagle Island. Zeta is apparently determined to take over both Pig and Bird Islands, and has a particular beef with the Lebowski-alike Mighty Eagle (Dinklage). Nobody expected The Angry Birds Movie (2016) to become the third highest-grossing film of all time based on a video game. The second film is not as entertaining, but it has some great voice talent, it breezes brightly along, and it has a nice anti-Thatcher message: “There is no such thing as the individual; there is only society.” We’re paraphrasing. G cert, gen release, 97 min TB Full review

Other ★★★★★ and ★★★★☆ films out and about: Apollo 11, The Dead Don’t Die, Do the Right Thing, Marianne & Leonard: Words of Love, Midsommar, Oldboy, Only You, Photograph, Rocketman, Yesterday