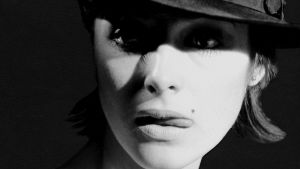 Penny Slinger has a remarkable body of work

Film Title: Penny Slinger: Out of the Shadows

There has been a revival of interest in women surrealists in recent years: Angels of Anarchy, a 2009 exhibition in Manchester, featured work from Frida Kahlo, Leonora Carrington, Francesca Woodman. Earlier this year, London’s Tate Modern staged the first large-scale exhibition of Dorothea Tanning’s work for 25 years. Penny Slinger: Out of the Shadows is a terrific addition to this welcome vogue.

The artist Penny Slinger recalls drawing her first “really accomplished” picture in 1952, made when she was four and a half. It was of her parents. Both were naked and “completely sexually endowed”. They were incredibly proud of the drawing but they were too embarrassed to show it to their friends. The drawing “set the tone” says Slinger, who was later expelled from convent school when, upon waving a sanitary towel aged nine, the nuns attempted to discipline her: the mother superior was kicked and bitten in retaliation.

“I wanted to be my own muse,” says the artist, who incorporated her body into many of her striking collages. Intriguing footage from the films Slinger co-created and performed in (The Other Side of the Underneath, Vibration) could easily be programmed as a feminist riposte to Alejandro Jodorowsky’s El Topo. But much of her 1970s work, as several commentators note, feels extraordinarily prescient and might easily have showcased alongside the YBA or later movements.

Richard Kovitch’s compelling documentary portrait – featuring extensive commentary from Slinger and interviews with art historians, curators, and her various sexual and artistic collaborators – has been billed as a kind of revival of a great lost artist. Slinger, however, was never lost; she simply moved from London where she was celebrated as an “It Girl” to the Caribbean, far away from the scenesters. Before that, Slinger’s story intersects with Germaine Greer, Mick Jagger, the Buzzcocks, and fellow surrealists Leonora Carrington and Max Ernst. She co-founded an all-female version of The Factory during the 1970s and incorporated anorexia, exorcism, bondage, and falconry into a remarkable body of work.