This challenging film will make you yearn for an escape 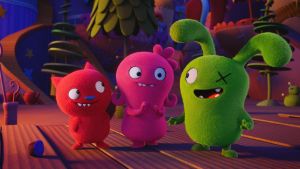 Not so much a movie as a contemplative space wherein the viewer – or more accurately the participant – explores the shifting dynamic between the eponymous plush toys and the hegemony of play. Moving through unexamined assumptions about the self, the body and othering, UglyDolls creates a terrifying sense of confinement and operates as a profound yearning for escape that lingers far beyond the experience itself.

The film’s relatively short chronology challenges and tilts traditional understandings and readings of the moment. The dolls themselves, as embodied by the singing protagonist Moxy (voiced by Kelly Clarkson), exist in a hermetically sealed space, not knowing that they are rejects within an infrastructure that valorises physical perfection and conformity while it simultaneously marginalises and disenfranchises those who defy the prevailing paradigm.

Moxy’s journey into the larger doll society, a new and radical interpretation of the creation myth, offers avenues into inclusivity and diversity, yet, more meaningfully, a bildungsroman into ontological futility.

These shifting derivatives are reconfigured and articulated through song, with music that subverts its own medium with repetitive and defiantly tuneless practice. The parodic archetype governs every aspect of the UglyDolls space: its many celebrity participants – a secondary manifestation of the project’s thematic preoccupation with unreality – working with thousands of animators, artists and filmmakers have, together, fused and fashioned a negated work or “work”, underpinned by a story (originally “suggested” by Shark Boy and Lava Girl director Robert Rodriguez) that is not a story, and expressed in intermittent dialogue – “Make your own truth”, “Work will set you free” – that debases and distorts our understanding of language, leaving only a sense of nihilism and a fresh insistence upon the prospect of a new order. Challenging.

‘The music industry is on its knees. Now is the time to throw the book out the window’
3