Good Boys: Too sentimental for adults, too raunchy for kids

Review: It’s a squalid mess that makes ill use of some talented young performers 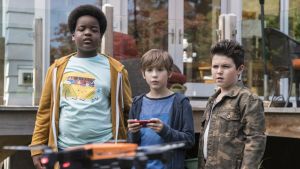 Lucas (Keith L Williams), Max (Jacob Tremblay) and Thor (Brady Noon) in Good Boys, written by Lee Eisenberg and Gene Stupnitsky and directed by Stupnitsky. It begins with a riff borrowed from American Pie that sets the uneasy tone for what is to follow

Here’s something you didn’t know you needed, but might have guessed you were going to get anyway: a comedy about, but not for, though apparently by half-brained 12-year-old boys.

How has it taken so long? Produced by Seth Rogen and others from the Superbad camp, the film presents three youngsters with a mission to be completed before (you’re way ahead of me) they attend a wild bash in the suburbs. In this instance, it’s a “kissing party” and they need a few tips before puckering up.

We begin with a riff borrowed from American Pie that sets the uneasy tone for what is to follow. Max (Jacob Tremblay) is becoming aroused at RPG characters when his dad (Will Forte) stumbles in and, after correctly assessing the situation, professes himself relaxed at the pubic developments.

Hang on? Jacob Tremblay out of Room? Have we been asleep five years? We have not. The picture goes on to weave between bunga bunga and supposedly naive charm without finding effective accommodation between the two. Max and his pals spend 30 seconds being teenagers and then 30 seconds being infants. They experiment with drinking beer, but run screaming at the sight of pornography. They can operate a drone with supreme efficiency, but none is able to open the child lock on a pill canister.

The most difficult scenes to process are those involving squabbles with older teenagers over a tub of ecstasy. Some may be outraged at the juxtaposition, and the “drug use” was surely a contributing factor to the 16 certificate. But most viewers (whoever the heck they may be) will find the oil-and-water tone more bewildering than shocking. The movie is too sentimental to appeal to adults and too raunchy for children.

Just about the only jokes that land involve the heroes parroting phrases from the pompous lectures on drug abuse and sexual consent that children now endure instead of films about not climbing electricity pylons.

It’s not enough. Good Boys is a squalid mess that makes ill use of some talented young performers. It’s not offensive; it’s just baffling.