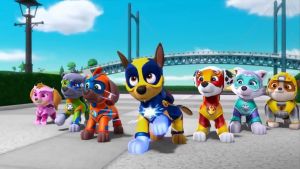 During the 1970s in a series of lectures at the Collège de France, Michel Foucault outlined a “secret history of the police”, characterising a force that paid greater attention to regulating the marketplace than investigating and arresting criminals.

The central task of the police, according to classical Foucauldian analysis, has also been to thwart and foil the possibility of revolution, the possibility of transgressing the order of capital: “For the bourgeoisie the main danger against which it had to be protected, that which had to be avoided at all costs, was armed uprising, was the armed people, was workers taking to the streets in assault against the government.”

Released in the same week as a 4K refurbishment of Stanley Kubrick’s Dr Strangelove, Mighty Pups proposes a Strangelovian scenario that allows for the emergence of a fascistic form of government in order to restore security. When Mayor Humdinger’s nephew, Harold, accidentally “diverts a meteor and changes its path to hit Adventure Bay”, the rock bestows superpowers upon Harold and the lackeys of the title.

Harold and his uncle attempt to overthrow the establishment, only to be thwarted by Paw Patrol. This happens despite the fact that the cartoon canines have become separated from their human slavedriver, Ryder. Thus, the apparatus chillingly maintains itself and the bourgeois order, even in the absence of state authority.

Inkeeping with the ideologically contradictory political theatre pioneered by Vladislav Surkov, the film’s orthodoxy is offset by the film-makers’ gleeful dismissal of Aristotelian structure. After 45 minutes of shouting and sloganeering (“You can do it!”) an announcer informs the audience that the film was “puptastic” (a-paw-lling is a more accurate assessment) before ushering an episode of Top Wing, which is basically Paw Patrol with birds. It’s not enough to jackboot across the earth: the very skies are policed and corporatised.

There is no sense of jeopardy or opposition in the erroneously named Adventure Bay. Harold and his uncle are not villains but Baudrillardian second-order simulacra, befitting a fake world run by corporations and kept stable by feeble politicians (personified by Adventure Bay’s tulip-obsessed mayor) and bootlickers like Paw Patrol.