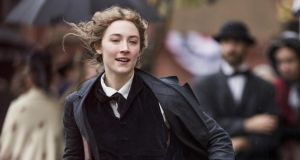 Oscars 2020: Saoirse Ronan has been nominated as best actress for Little Women

Saoirse Ronan has received an Oscar nomination as best actress for her performance as Jo March in Greta Gerwig’s Little Women. This is the Irish actor’s fourth Oscar nomination.

Already a nominee at the Golden Globes and the Baftas, Ronan was always likely to score, but she will have trouble triumphing against stiff competition.

Among the films nominated for best picture were Martin Scorsese’s The Irishman, Sam Mendes’s 1917 and Quentin Tarantino’s Once Upon a Time in… Hollywood. Todd Phillips’s otherwise divisive Joker topped the nominations table with an unexpected 11 nods.

Bong Joon Ho’s Parasite, winner of the Palme d’Or at Cannes, continues an extraordinary run in awards season by scoring a nod in the best-picture race

As has been the case in recent years, no film stands out as a runaway favourite. In an unusual development, three films scored a huge 10 mentions (usually enough to be comfortably in front): The Irishman, Once Upon a Time in… Hollywood and 1917.

Bong Joon Ho’s Parasite, winner of the Palme d’Or at Cannes, continues an extraordinary run in awards season by also scoring a nod in the best-picture race. Bong was also nominated as best director. The biting Korean satire has a realistic chance of becoming the first film in a language other than English to win the top prize.

Several strong contenders have already emerged in the acting races. Joaquin Phoenix, winner of the Golden Globe for Joker, is the man to beat in best actor. Adam Driver, nominated as one half of a warring couple in Noah Baumbach’s Marriage Story, is probably his main competitor, but Phoenix has already built up considerable momentum.

Renée Zellweger, up for her role as Judy Garland in Judy, is in almost as strong a position in the best actress race. Scarlett Johansson, Driver’s other half in Marriage Story, and Charlize Theron, who plays journalist Megyn Kelly in Bombshell, are also in with a shot. But Zellweger’s showy turn – complete with impersonations and singing – is exactly the sort that awards juries adore.

Laura Dern, who plays a ruthless lawyer in Marriage Story, seems like the most likely winner of best supporting actress. Her rivals in the race include Margot Robbie, who also stars in Bombshell, a drama about sexual harassment at Fox News. There was a surprise in this category when Kathy Bates scored a nomination for Clint Eastwood’s Richard Jewell. Many had predicted Jennifer Lopez to figure for Hustlers.

To nobody’s great surprise, the voters at the Academy of Motion Picture Arts and Sciences acceded to the distributor’s request that they vote for Brad Pitt as best supporting actor in Once Upon a Time in… Hollywood. The role is really a colead with Leonardo DiCaprio, but the star now looks likely to beat out his fellow nominees Al Pacino and Joe Pesci, both up for The Irishman, in that category.

There will be raised eyes at the modest levels of diversity among the acting nominees. All but two were anglophone white actors. Scarlett Johansson has two nominations on her own

There were few other enormous shocks among this year’s shortlists. Following a change in rules a decade ago, the academy selects between five and 10 candidates for best picture. This time there were nine. Not many pundits were taken aback at the final list: The Irishman, Jojo Rabbit, Joker, Little Women, Marriage Story, 1917, Once Upon a Time in… Hollywood, Parasite and – the closest thing to a dark horse – James Mangold’s Le Mans ’66 (known as Ford v Ferrari in its home country).

There will, however, be raised eyes at the modest levels of diversity among the acting nominees. Cynthia Erivo, a black actor from south London, lands in the best-actress category for her role as the abolitionist Harriet Tubman, in Harriet. The beloved Spanish performer Antonio Banderas competes as best actor for his turn in his old chum Pedro Almodóvar’s Pain and Glory. The rest were all anglophone white actors. (Scarlett Johansson has two nominations on her own.)

The academy will also be anxious about the fact that, yet again, no women have made it in as best director. Greta Gerwig seemed to have a good chance for Little Women, but the list was again all men.

Four directors seemed nailed down for best-director nominations: Martin Scorsese, Sam Mendes, Quentin Tarantino and Bong Joon Ho. The fifth spot looked up for grabs, and Todd Phillips seems to have snatched it from under Gerwig’s nose. The culture wars continue.

The notable success of Joker, a film popular with right-wing social media commentators, will fire up that conversation.

There were a few more surprises in a largely foreseeable list. Walt Disney’s Frozen II, which recently became the highest-grossing animated film of all time, was (ahem) frozen out of the best-animated-feature race. Beyoncé’s Spirit, composed for The Lion King, also failed to land in best original song.

Today’s list confirms some surprising shifts in studio politics. Netflix has really arrived, with 24 nominations for films such as The Irishman, Marriage Story and The Two Popes. Disney will be grateful for the nominations that came its way courtesy of the company’s acquisition of 21st Century Fox, producer of films such as Jojo Rabbit and Le Mans ’66. Yet it was Warner Bros, one of the original “big five” studios, which scored the best individual result, with the all-conquering Joker.

The actors John Cho and Issa Rae announced the nominations at break of dawn in Los Angeles.

There has been much panic in this year’s awards season, as the ceremony has been brought forward by about three weeks, to Sunday, February 9th. This has resulted in a packed schedule, with precursor awards such as the Baftas, the Screen Actors Guild and the Golden Globes scrabbling for space in the weeks after Christmas.

It was confirmed last week that, for the second week running, the ceremony will have no formal host.

Is fighting in our genes? A biological theory of warfare
6

Debbie Harry: ‘Sex is what makes everything happen’
Real news has value SUBSCRIBE

Is fighting in our genes? A biological theory of warfare
Real news has value SUBSCRIBE