Oscars 2018: 10 talking points from the nominations

Saoirse Ronan and Daniel Day-Lewis have been nominated in the leading role categories for the 2018 Oscars. Elsewhere, Breadwinner was nominated in the Animated Feature category. Video: oscar.go.com 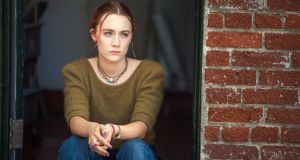 This image released by A24 Films shows Saoirse Ronan in a scene from "Lady Bird." Ronan was nominated for an Oscar for best actress on Tuesday, Jan. 23, 2018. The 90th Oscars will air live on ABC on Sunday, March 4. (Merie Wallace/A24 via AP)

THREE IS A MAGIC NUMBER FOR THE IRISH

Have we got blasé about Saoirse Ronan’s record at these awards already? Only one other female actor has scored three nominations before the age of 24 (that’s Jennifer Lawrence, fact fans).

With The Breadwinner registering in best animated feature, Kilkenny’s Cartoon Saloon grabs its own third nomination.

And costume designer Consolata Boyle, up for Victoria & Abdul, also completes a triple (all for Stephen Frears films).

THE SHAPE OF WATER ALMOST EQUALS THE NOMINATIONS RECORD

Guillermo del Toro’s romantic fantasy – in which a mute Sally Hawkins falls for a fish-creature – somehow failed to get a mention in best visual effects. Had it done so it would have become – alongside La La Land, All About Eve and Titanic – only the fourth film to score 14 nominations. They will settle for 13 and second place.

THE FIRST EVER FEMALE NOMINEE FOR CINEMATOGRAPHY

It scarcely seems possible, but, in the awards’ 90-year history, no woman had been nominated for her work as director of photography. Until now. Rachel Morrison received the nod for her work on Dee Rees’s sprawling epic Mudbound. “It’s not just about cinematography, it about believing in yourself and that anything’s possible,” she said after the announcement. Morrison? Can we claim her as Irish?

Nobody would pretend that the film business has cured its white male bias. But people of colour were all over the acting nominations – Mary J Blige, Denzel Washington, Octavia Spencer, Daniel Kaluuya – and African-American Jordan Peele scored a best director nod for Get Out. Greta Gerwig becomes the fifth woman nominated as best director. And most of the relevant nominated films were genuine hits.

THE ANNOUNCEMENT WAS A BIT OF A MESS

For the second year running, the Academy ditched the formal announcement before assembled press for a groan-worthy live stream with pretentious inserts preceding each category. Andy Serkis and Tiffany Haddish, the presenters, are both hugely likeable actors, but their stilted joshing would have better suited the later stages of a well-oiled wedding bash.

Before the announcements, Martin McDonagh’s Three Billboards Outside Ebbing, Missouri was shaping up to be an odds-on favourite. Not any more. Only one film has won best picture without a nomination for director in the last 29 years. That film was Ben Affleck’s Argo. The sense that Affleck was hard done by may have helped that film, but Billboards is a more divisive picture.

CAN SHAPE OF WATER BEAT THE SAG CURSE?

Last year, La La Land equalled the all-time record for most nominations. As a result, most punters ignored the fact that it had failed to score a best ensemble nomination at the Screen Actors Guild and installed it as unbeatable favourite. No film has, however, triumphed at the Oscars without that nod since Braveheart in 1995. La La Land fell to SAG nominee Moonlight. The Shape of Water, groaning under its 13 nods, makes another effort to shake that curse.

NETFLIX ARRIVES AT THE OSCARS

To this point, the streaming service – less inclined to theatrically distribute their films than rivals Amazon – has only scored nominations in the documentary categories. Mudbound’s three mentions finally nudges Netflix into the main body of The Oscars. The African-American epic will struggle in best cinematography and best adapted screenplay. But Mary J Blige has a sniff for best song.

WHO’S UP AND WHO’S DOWN?

Oddly, the Three Billboards people would have been happy with seven nominations if one of them were for best director. As it stands, they will feel a bit snubbed. Spielberg’s The Post underperformed with just two mentions. The Big Sick got only one. But it was a good morning for Paul Thomas Anderson’s Phantom Thread and Joe Wright’s The Darkest Hour. Both scored mildly surprising mentions in best picture. Anderson took the directing nod many had down for McDonagh.

THE BREADWINNER BEATS THE RULE CHANGE

Last year it was announced that, in future, all Academy members would get to vote on the nominees for best animated feature. Previously, with that voting restricted to the animation branch, independent producers felt more confident that their smaller films would not get bullied aside by the big boys. But Cartoon’s Saloons’s The Breadwinner proved strong enough to triumph with even the wider electorate.