‘My Catholic mother just wanted me to be a priest. That’s where homosexuals would go’

John Cameron Mitchell, ‘Hedwig and the Angry Inch’ creator, on ‘How to Talk to Girls at Parties’ and its star 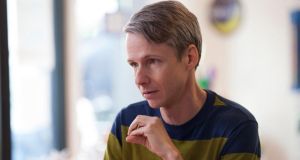 How to Talk to Girls at Parties: John Cameron Mitchell, the film’s director

Before digging further into the diversions of John Cameron Mitchell, queer impresario of the moment, it’s worth pondering his singular upbringing. His father was a US general of note. Do I have that right?

“He was the US military commander of Berlin for the four years before the wall came down,” Mitchell says. “I would go and visit and hang out in the punk clubs. I would then go back to the mansion paid for by the German state. The last of the Hohenzollerns and Kirk Douglas might be there for dinner. They’d always have a Berlin film-festival brunch for the jury. I remember meeting Agnès Varda, who stripped the buffet and left. Now that’s an independent film-maker. Right?”

Half of this makes absolute sense. The other half requires some pondering. We meet as this son of an American general and a socially conservative Glaswegian teacher launches a deranged alien-meets-punk extravaganza called How to Talk to Girls at Parties. Mitchell had already carved out his place in the pantheon with the transgender musical Hedwig and the Angry Inch – an off-Broadway hit, then an independent film, most recently a Tony-winning Broadway smash.

I was in Kansas in a crappy town when punk really happened. I got into it later, in the early 1980s. But I kind of missed it. I was the weirdo who did like rock’n’roll

Now an impressively fresh-faced 55 – one could still use the adjective “boyish” with a clean conscience – Mitchell was born in Texas and educated at a Catholic boarding school in Scotland. Based on a short story by Neil Gaiman, How to Talk to Girls at Parties, which features Nicole Kidman as a cross between Vivienne Westwood and Vampira, brings us back to unglamorous Croydon in the years of the director’s adolescence. But punk means something different to Americans. Even those schooled in Scotland. Correct?

“Yes, I lived in Scotland in the early 1970s,” he says. “It was then about glam. Bowie was the rebellious thing. That was exciting and inspired punk. But I was in Kansas in a crappy town when punk really happened. I got into it later, in the early 1980s. But I kind of missed it. I was the weirdo who did like rock’n’roll. That would have been ideal for me. So I had to synthesise my own version.”

Mitchell went on to study drama at Northwestern University, in Illinois, in the early 1980s. He did all right as an actor. He appeared in such hit plays as The Secret Garden, Six Degrees of Separation and The Destiny of Me. You may have missed him on TV shows such as MacGyver and Law & Order. All this while the notion of Hedwig and the Angry Inch was maturing. The show, starring Mitchell as a transgender East German rock musician, sprung energetically on to the off-Broadway scene in 1998.

“I was acting a lot. I was making a living since college in films, TV, Broadway. I was getting a little bored around 30. I was starting to write. I’d go to punk clubs. I’d go to drag clubs. I liked the feeling of it. I thought, I want to get the feeling I get from a rock show in a theatre piece. Rock musicals are always a bit watered down.”

Yes, so many aspire pompously to the form of opera.

“People said, ‘Are you trying to commit career suicide?’ Drag? Punk? This is mad if you want a career in the early 1990s, with Aids happening. I thought: F**k that, people are dying! Maybe I didn’t get some work because of it. But I ended up doing something I was proud of. People liked it. But it wasn’t really a hit.”

Until 2014, when the revival with Neil Patrick Harris stormed the Tonys?

“Yes, until Broadway!” he says with a merry smile.

Hedwig opened doors for Mitchell even before then. The film emerged in 2001, and although it wasn’t a smash in cinemas it made its money back on DVD. In 2006 he directed the well-received, sexually explicit Shortbus. What did his mother make of it all?

“She is extremely Catholic,” he says. “I was going to hell. But you know the Catholic thing. Everyone is going to hell. She just wanted me to be a priest. That’s where homosexuals would go. She didn’t say that out loud, but that was the place for me.”

The sober, taxing Rabbit Hole, starring Kidman as a bereaved parent, seemed like a bit of a swerve in 2010. “I made that for my mom, because I had a brother who died when I was very young,” he says. “It was a great challenge for my family. Doing that with Nicole was for my mom.”

He and Kidman seem to have got on like gangbusters. The early reviews of How to Talk to Girls at Parties, which also stars Elle Fanning and Ruth Wilson, have not been uniformly excellent (euphemism alert), but it certainly looks as if the cast are having a blast. Appearing for a modest fee, Kidman struts and bellows with admirable abandon.

“She’s one of the most self-directed actors I know,” he says. “Some actors want to be coddled. They need mouth-to-mouth after every take. She is quite tough and proud. She has her process, and you don’t want to mess with it, because you won’t get good results.”

Nicole Kidman will just do anything . . . Kate Winslet’s not going to dirty herself up

Mitchell could talk for Team USA (or Scotland if they wanted to employ the mother rule). Set him off on Kidman and, in a voice as gentle as it is unstoppable, he’ll happily deliver you a pocket lecture.

“She’s nothing if not courageous,” he says. “She seeks out directors like Park Chan-wook, Yorgos Lanthimos, Lars von Trier. ‘Who are the people who are trying stuff?’ ‘Who interests me?’ There are very few actresses in that class. There’s Isabelle Huppert. There’s Tilda Swinton. Marion Cotillard. They will just do anything. Um . . . Kate Winslet’s not going to dirty herself up.”

Ouch! That was worth waiting for.

Mitchell finds himself in an interesting place. Even if How to Talk to Girls at Parties fails to eat up the box office he has established himself as a mighty force in US culture. Rabbit Hole confirmed he can play it mainstream. The revival of Hedwig and the Angry Inch confirmed he can connect with the popular zeitgeist. He is looking for someone who can sing in convincing Glaswegian for a podcast project that’s “in the Hedwig area”. “Meryl Streep just kindly declined. She was very nice to me,” he says.

I wonder, however, if, having begun with transgressive art, Mitchell worries a little about being absorbed into the establishment. Hedwig and the Angry Inch started its life in a rough-and-tumble club called Squeezebox. It played most recently at the posh end of Broadway. Is that a concern?

“No. Because it’s paying for my mom’s Alzheimer’s care,” he says. “She might be uncomfortable about that if she knew. That’s the one good thing about Alzheimer’s. It erases all the stupid stuff.”

What journeys they have had. She travelled from Glasgow, looking for work, in the 1950s. Now Mitchell visits her in distant Colorado.

“My dad passed,” he says. “Now we sing old Harry Lauder songs together. Andy Stewart. Donald Where’s Your Troosers? All those things.”

There’s a film in that story.

How to Talk to Girls at Parties opens on Friday, May 11th

The Punk Rock Movie (1977)
Don Letts (still a talking head on every BBC Four music documentary) shot all the pioneers on Super 8 at the Roxy: Sex Pistols, The Clash, Subway Sect, Siouxsie. The Bayeux tapestry of punk.

Jubilee (1978)
Derek Jarman’s punk epic is a glorious, chaotic mess. Keep your eyes open for Adam Ant, Toyah Willcox and a pre-Chariots of Fire Ian Charleson in a romantic tale of British decline.

Sid & Nancy (1986)
It wouldn’t require much stretching to sell this darkly hilarious story of Sid Vicious’s decline as the best work from Alex Cox, its director, and Gary Oldman, its star. “You can’t leave, Sid. We’re the rhythm section.”

We Are the Best! (2013)
Set in 1981, when punk didn’t really exist any more, Lukas Moodysson’s Swedish film sits slightly awkwardly in this company. But its treatment of rebellious Swedish youth is delightful.

End of the Century: The Story of The Ramones (2003)
There are a lot of punk documentaries on a lot of punk bands, but this study of the Queens dynamos is as good as any.