Saddle up: The best movies with horses in them

Movie cats are malicious. Dogs can be savage. But horses are always brave, handsome and stoic 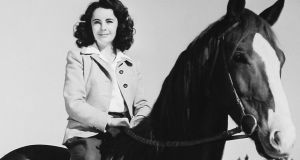 Here’s a theory. The best films with “horse” in their titles are founded on lies. The Wooden Horse (1950) doesn’t have any horses in it. A Man Called Horse (1970) has plenty of horses in it, but the title character isn’t one of them (he’s Richard Harris).

Béla Tarr’s brilliantly miserable The Turin Horse (2011), has much to do with a horse – poor fellow has a bad time of it – but it’s not the horse referenced in the title (that was the abused beast that sent Friedrich Nietzsche bonkers). Will this do?

I don’t know why I mention this. Andrew Haigh’s current Lean on Pete doesn’t have “horse” in the title. It is, however, named for the overworked, worn-down beast that brings some meaning to young Charley Thompson’s life in a fine adaptation of a Willy Vlautin novel.

Charlie Plummer is touching as the protagonist. Various creatures are lovable as the racehorse who, facing an imminent future as glue, gets taken on one last journey across the United States. He’s a decent beast. He teaches Charley responsibility. He fills an emotional gap.

That’s what horses do in films. Cats are occasionally malicious: think Si and Am in Lady and the Tramp. Dogs are occasionally savage: consider the titular Saint Bernard in Cujo or the racist hound in Sam Fuller’s White Dog.

But horses always bring out the best in decent characters. They’re brave and handsome. They’re hard working and stoic. Despite the importance of France as a cinematic force, horses are almost never eaten in movies. There are more films about cannibalism than about horse butchery.

Once upon a time you couldn’t move for horses in the movies. During the long high-period of the western – from the beginning of the medium to around 1960 – any actor with ambition would, at the very least, lie about their equestrian abilities on their CV. If there wasn’t a western on the way, there was probably something involving crusades or King Arthur. The horse was an essential piece of furniture.

Still, not all films featuring horses are films about horses. The dedicated horse film is practically a genre in itself. It often involves a child. It inevitably takes in learning and hugging. If the horse dies, it is a terrible thing and – I’ll say it again – nobody eats the unfortunate creature. Not even in France.

All this may have something to do with the fact that humans and horses evolved side by side. We would never have got where we are today without their assistance. They helped us travel great distances, power primitive machinery and kill each other with significantly greater efficiency. If we hadn’t entered into this relationship, we’d still be living in caves, drinking fetid rainwater and eating … well, them perhaps.

We owe them this level of respect.

The granddaddy of them all might be National Velvet. Released in 1944, the picture starred the fast-rising Elizabeth Taylor as Velvet Brown, an English girl who yearns to ride in the Grand National.

My mother still tells the story of her dad – a farmer from South Armagh – making a very rare visit to the cinema and, after seeing Liz triumph, snorting “Total nonsense!” though cataracts of tears. Mickey Rooney learnt respect for women. Velvet gained courage and confidence. The characters dined on something other than horse to celebrate.

In The Horse Whisperer, an equally young Scarlett Johansson – let’s call her the Elizabeth Taylor of her day – gained relief from trauma through her interaction with Robert Redford and more horses. The film pressed home the near-mystical power the movies layer on the equine.

In Steven Spielberg’s somewhat undervalued War Horse (2011) – honest, it’s grand – the courageous four-legged Joey spreads warmth and understanding wherever he goes. You may be a farmer from Devon. You may be a German soldier. But you will still be made better by association with a horse. Heck, even the elderly French farmer resists the temptation to serve Joey on a bed of kale.

The excellent Lean On Pete comes across as an American cousin of a great Irish horse-saviour movie. Mike Newell’s Into the West (1992) – derived from a Jim Sheridan script – tells the story of two young Travellers journeying from Dublin to the mythical west in search of a beast that is actually called Tír na nÓg.

Once again, there is a sense that the horse is not just a horse. The animal has the power to make us better, more enlightened people. As with Lean on Pete, the horse offers comfort to the underprivileged.

Gary Ross’s Seabiscuit (2003) grants the titular racehorse even greater abilities. If the film is to be believed, the plucky animal’s triumph did more to drag the USA out of the Great Depression than the New Deal and the second World War combined. That’s what horses do.

150m Shades of Grey: How the bestsellers changed our sex lives
5