Review: It’s not a good film, but it is clogged with star actors and good jokes 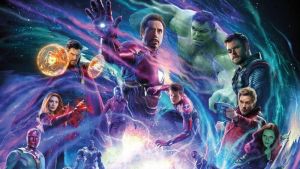 There is a film called Avengers: Infinity War. It can be viewed in cinemas. That’s all we can tell you.

Much of the advance publicity for the latest 50 yards of generic Marvel fabric has comprised entreaties to remain silent about its every twirl and squiggle. We were, at the press screening, actually handed badges reading: “Thanos Demands Your Silence”.

I ask myself: “What would Iron Man do?” He’d hum and haw like Robert Downey Jr and – after looking at a spot just over your left shoulder – tell the current villain to go to Hell. Right?

Put away your conspiracy theories. Nobody in the Marvel camp is much afraid of the reviews. That’s not to suggest Infinity War is a good film. It’s overlong, overcrowded and over here. But it gives everyone a go on the tricycle and propels each to dramatic (if not exactly fresh) catastrophes.

Bringing together increasingly middle-aged heroes to offer polished, efficient versions of familiar hits, the film has about it the quality of an AOR tribute album. Kris Kristofferson and Aaron Neville doing nothing too awful to Don’t Think Twice It’s Alright. And so on.

Now, as long as they don’t fall back on the tired plot that sees some giant demi-God trying to annihilate the planet . . .

No, that’s not it. It’s more like one of those middle-brow wide-screen epics – Mike Todd’s Around The World in 80 Days sounds about right – that crammed a 100 stars into a space that, though huge, wasn’t huge enough for all the queuing Sinatras, Gielguds, Lorres and Keatons. (Come to think of it, Jules Verne would never be allowed that title today. Think of the spoilers.)

You’ve seen the poster. You’ll know that Iron Man, Captain America, Spider-Man, Black Panther, Kitchen Sinker and Tom Cobley-Man (though not that dull fellow with the arrows) are back to throw quips at one another for many hours. Now, as long as they don’t fall back on the tired plot that sees some giant demi-God trying to annihilate the planet . . .

What was I thinking? One of the best scenes in the film finds Vision (Paul Betanny) and Scarlet Witch (Elizabeth Olsen) avoiding attention in a picturesque corner of central Edinburgh.

Passing one of that city’s many chip shops – “We will deep fry your kebab” a sign actually says – they glimpse TV news footage of aliens attacking New York.

It hardly needs to be said that the film is a tad episodic. The one-note Guardians of the Galaxy are easier to take in the smaller portions they’re allocated here

Wouldn’t they have heard if something so momentous was going down? Maybe not. In this universe, apocalyptic catastrophe is so commonplace it probably struggles to make the “and finally” section.

Anyway, if Thanos (Josh Brolin) will allow us to say so, the current chaos kicks off when that alien tyrant arrives on Earth in search of magic jewels that will allow him to dominate or destroy or redecorate the universe. Honestly, I couldn’t spoil this stuff even I wanted to.

Before long, everybody in Stan Lee’s phone book (apart from the boring guy with the arrows) has rallied in resistance.

It hardly needs to be said that the film is a tad episodic. The one-note Guardians of the Galaxy are easier to take in the smaller portions they’re allocated here.

Iron Man needs another gag aside from being permanently annoyed, but the birthday-party magician quips he throws at Dr Strange (Benedict Cumberbatch) are not bad. A massive siege sequence involving Black Panther and other citizens of Wakanda gives us an agreeable Bizarroworld take on Zulu.

Even Marvel sceptics might, if the film didn’t take its guff so seriously, accept the gang-show aesthetic and offer two cautious thumbs up.

That’s not to say Infinity War isn’t clogged with jokes. If anything there are too many smart-arse remarks. But, whereas the delightful Spider-Man Homecoming and the hysterical Thor Ragnarok had irreverence baked into their structures, the current compendium ultimately aspires to the status of Greek tragedy. That would be a stretch even if Mister Fantastic were on board.