Superhero chaos in Avengers, the jolting thiller Beast, and a James Whale classic 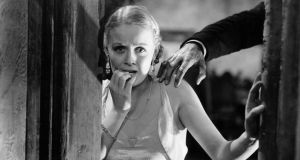 THE OLD DARK HOUSE ★★★★★
Directed by James Whale. Starring Boris Karloff, Melvyn Douglas, Ernest Thesiger, Charles Laughton, Gloria Stuart, Raymond Massey. Club, QFT, Belfast; IFI, Dublin, 72 min
Two sets of travellers shelter with lunatics in a terrible storm. Hugely welcome reissue for James Whale’s funniest, most subversive horror flick. From 1932, The Old Dark House might be the most British film ever made on American soil. It’s not just that it exploited the finest that Yorkshire (Laughton), Surrey (Karloff), Worcestershire (Whale) and Marlborough College (Thesiger) had to offer. The sensibility could hardly be more English if it were served with pickled onions. Spooky. Queasy. Hilarious. Brilliant. DC

If Thanos (Brolin) will allow us to say so, the latest superhero chaos kicks off when that alien tyrant arrives on Earth in search of magic jewels that will allow him to dominate or destroy or redecorate the universe. Before long, everybody in Stan Lee’s phone book has rallied in resistance. Even Marvel sceptics might, if the film didn’t take its guff so seriously, accept the gang-show aesthetic and offer two cautious thumbs up. But it’s as up-itself as ever. Full review/trailer DC

Upstaged at her own deathly birthday party, Moll (Buckley, terrific) slinks off to a local nightclub where a boozy evening is rounded off with an encounter with rugged Pascal (Flynn), a huntsman who lives off the land. Pearce’s film resurrects the psychological thriller with jolts of Hitchcockian intrigue and class snobbery. The insular Jersey setting amplifies both Moll’s isolation and rebellion and makes for strange colonial undercurrents and hints of such ley-line English horrors as The Wicker Man. Full review/trailer TB

Three gay men work out tensions at a Xhosa coming-of-age ritual in South Africa. Comprising balanced compositions that use every inch of the widescreen frame, Paul Ozgur’s cinematography eats up the baked landscapes. The flawless performances convey the suppressed panic that dogs closeted men in hyper-masculine environments. Audiences outside South Africa will be particularly intrigued by the interactions between the modern nation and ancient tribal traditions. A necessary and troubling film. Full review DC

Freyne’s impressive debut feature imagines an Ireland in which, following a zombie apocalypse, rehabilitated flesh eaters are integrated back into society. Keely is broken as the damaged hero. Vaughan-Lawlor is charismatic as a rebel. Page is impressively flattened as Keely’s sister-in-law. The core action gets a little swamped by import in the closing stages. But this remains an original, thoughtful entertainment that is sure to propel its creator towards still greater things. Full review DC

Picking up where 2010 sleeper hit His & Hers left off, Ken Wardrop’s third feature depicts the relationships between Irish piano students and their teachers. The film meets and warmly greets some 51 participants – hailing from all over Ireland – as they prepare for their Royal Irish Academy of Music examinations. Using that body’s grade structure, Making the Grade opens with five-year-old Harry Keegan climbing on to a stool for his first lesson, and closes with those tackling Rachmaninoff for Grade Eight. Heartwarming. Full review TB

Dr James Barry: the Irishwoman who fooled the British Empire
5