Review: First released in 1932, this Boris Karloff picture was thought lost for years 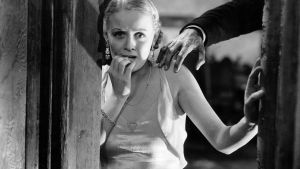 Right-thinking people will have few more pleasant experiences at the cinema in 2018 than a trip to this spanking digital restoration of James Whale’s funniest, most subversive horror film.

First released in 1932, between the director’s Frankenstein and his The Invisible Man, the picture was thought lost for years and, following rediscovery, was only available in a scratchy print that clicked as often as it popped. The new version feels a little like a miracle.

Based (surprisingly closely) on J B Priestley’s novel Benighted, The Old Dark House – which leant its name to a whole genre – concerns two groups of travellers stranded in a remote Welsh mansion during a torrential storm. “Even Welsh ought not to sound like that,” Melvyn Douglas’s suave playboy says on first encountering Boris Karloff’s mute, lurking butler.

The weird Femm Family is not happy to have the visitors. The guests are not happy to be there. But needs must when Universal Studios points its most powerful wind machines in your direction.

Twenty years ago, The Old Dark House was often mentioned as hitherto the most famous film to feature Gloria Stuart. The future star of Titanic – who looks as much like the young Kate Winslet as does the average umbrella – is fine as the most frightened guest, but this is really a showcase for the era’s best character actors. Karloff offers a meaner variation on his Frankenstein monster.

Charles Laughton is charming as a Yorkshire businessman who fails to hide a decent heart. Nobody ever upstages Ernest Thesiger. The Mikado of English inter-war camp, later to excel in Whale’s Bride of Frankenstein, points every syllable as the most eccentric, most slippery, least bonkers member of the Femm clan. Nobody else can lend such nuance to a line such as “Have a potato!”

All this is in the service of a story that, though soaked in the broadest melodrama and indecently besotted by its incestuous overtones, still manages to say something worth hearing about how the first World War damaged young minds.

The Old Dark House is also the most British film ever made on American soil. It’s not just that it exploited the finest that Yorkshire, Surrey, Worcestershire and (Thesiger, of course) Marlborough College had to offer. The sensibility could hardly be more English if it were served with pickled onions. Have a potato.