The Wound: A debut that cuts deeply into the male psyche 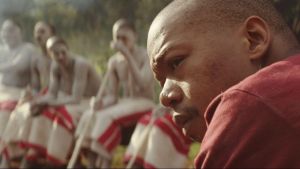 We are familiar with gay stories that hang around implicit male coming-of-age rituals. There’s a bit of that in Moonlight. There’s some more of the same in the recent Beach Rats.

John Trengrove’s excellent debut – shortlisted at the Oscars for best foreign language feature – is unusual in that it observes an explicit coming-of-age ritual: tribal rites of the Xhosa people in South Africa. Much else deserves celebration here.

Comprising balanced compositions that use every inch of the widescreen frame, Paul Ozgur’s cinematography eats up the baked landscapes. The flawless performances convey the suppressed panic that dogs closeted men in hyper-masculine environments.

Audiences outside South Africa will be particularly intrigued by the interactions between the modern nation and ancient tribal traditions. Some variation on that happens everywhere. Is First Communion season not now upon us?

Trengrove begins by cutting from a rural waterfall to Xolani (Nakhane Touré) driving his forklift truck about a busy factory. He then meets a middle-aged businessman – the Mercedes presses home urban modernity – who argues that his son Kwanda (Niza Jay Ncoyini), too effeminate for Dad’s taste, needs a bit of old-school tribal toughening-up. The sight of a machete in Xolani’s backpack as he approaches the rural campsite should warn male viewers to cross legs in anticipation. The subsequent scenes of circumcision are not explicit, but most imaginations will work overtime to fill the bloody gaps.

It transpires that Xolani is one of the mentors who, as well as supervising circumcision, talks the initiates though the less-uncomfortable social traditions. When not with the boys, Xolani fires up a long-standing sexual relationship with fellow mentor Vija (Bongile Mantsai). Tensions between the three principals nudge the action towards a troubling conclusion.

There is, perhaps, a little less plot than one might have liked. The film plays out through a series of angry disputes that tease out the relationships without establishing any great mysteries. But the atmosphere is so enveloping that this hardly matters.

The unsettling echo between the forbidden sexual liaisons and the approved brutal intimacy of the circumcision pushes home the skewed nature of so much formal masculine interaction. The film surges. Then it simmers. The final terrible reversal may not please everyone, but it certainly leaves you shaking.

Robert Eggers on bringing Robert Pattinson to The Lighthouse
7

Amybeth McNulty: the Donegal teenager who stars in ‘Anne with an E’
9