X-Men: Dark Phoenix: The plot feels like it was scribbled on a menu after a drunken lunch 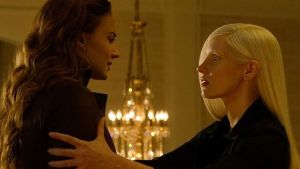 Your mind wanders when watching an X-Men Babies film. The wider franchise dates back to 2000. Correspondents to The Irish Times’ letters page would argue that this counts as the 20th century. You know? The century with the Great Depression and George Formby.

For close to 20 years, the X-Men films have provided a low-level accompanying hum (louder if you’re actually in the cinema, obviously) to a torrent of changes in popular culture. The first two X-decades end with 20th Century Fox, their corporate overlords, being sucked into the Disney Empire. Time to press home the case for relevancy.

Yeah, about that. If you thought the brief girl-power moment towards the end of Avengers: Endgame was perfunctory prepare yourself for dramatic sighs in the opening act of Dark Phoenix.

“The women are always saving the men,” Baby Raven (a blue Jennifer Lawrence) says to Baby Professor X (James McAvoy). “You may want to think of changing the name to X-Women.” Careful you don’t cut yourself on your radical edge, Jen.

Still, we should celebrate that the fact that, 12 (!) films into the series, we have an episode that focuses on a female character. Sophie Turner plays the X-Person most often known as plain old Jean Grey (would she have taken a superhero pseudonym if she had been christened Doris Blennerhassett, I wonder).

In an early sequence, set in the 1990s, the X-Men Babies travel into space to rescue an endangered space shuttle. The same sort of rays that once made the Four so Fantastic blast their vessel and cause the Grey lady to have a bit of a turn. When she comes to she finds herself stronger, faster and more prone to portentous reflection than ever before.

She is now Dark Phoenix and – like the Superman who spat peanuts at mirrors in Superman 3 – she soon becomes a menace to the people she once swore to protect. Baby Magneto (Michael Fassbender) is contacted at his hippie retreat in the country. The government starts to clamp down on mutants. And so on.

You might reasonably conclude that the plot had been scribbled down on the back of a menu after a long, drunken lunch, but it appears the inspiration was some comic from the early 1980s.

The thing is a sludgy mess that makes little effort to explain character motivation or the rationale behind the increasingly elaborate set pieces. Exhibiting no apparent desire to place particular emphasis on one syllable over another, Turner delivers all her lines as if trying to make sense to Siri while a pneumatic drill hammers nearby.

Jessica Chastain is actually playing a class of brain-fried zombie, but she still manages to instill more feeling into her lines than does her younger co-star.

This is an issue for McAvoy and Fassbender. It’s a real problem for the performers stuck with supporting roles. Poor old Ororo Munroe – a good actor given little to do as Storm – suggests a teenager who’s dressed up as Halle Berry for her high school’s Halloween party.

Nothing here argues for an independent life within the Disney Empire. This is almost certainly the last in a long line of so-so films. They go back to the 20th century, you know.