Review: A delightful workplace comedy garnished with a sad but genial subplot 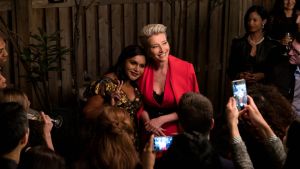 Late night television has proved a rich comic seam for Larry Sanders and 30 Rock so what can Mindy Kaling bring to the party? Well, she can bring herself.

Kaling, who came to prominence as a writer and star on the US version of The Office, has previously based her hit show The Mindy Project on her mother and has produced two best-sellers adhering to Nora Ephron’s maxim that everything is copy. Late Night was loosely inspired by Kaling’s experience of being the only woman – and the only person of colour – in a writing room.

Said room is a group of lads struggling to come up with new material for Katherine Newbury (Emma Thompson), an icy TV chat show host – characterised by journalists as “Your Least Favorite Aunt” – with falling ratings and little or no capacity for the common touch. Upon learning that this season will be her last, a desperate Newbury barks an order at her long-suffering right hand man (Denis O’Hare): “Just hire a woman!”

Enter Molly Patel (Kaling), a fan-girl with no experience but plenty of enthusiasm and cupcakes for all. Kaling’s zippy, big-hearted screenplay finds humour in the diversity hire experience. (If you’re the sort of person who balks at the words “diversity hire” you’ll probably miss the carefully crafted story arcs that Kaling has written for her male co-stars.)

Canadian director Nisha Ganatra keeps things bright and breezy. In common with The Mindy Project, Late Night successfully and lightly pings between zingers and shifting relationships. Newbury is a slowly thawing variation of The Devil Wears Prada’s Miranda Priestly. Her ailing husband, played by John Lithgow, adds a sad and lovely subplot. But it’s Kaling’s guileless try-hard who brings the most warmth to this delightful workplace comedy. “Your earnestness can be very hard to be around,” Newbury snaps at Kaling’s Molly. In fact, Kaling’s earnestness is precisely her appeal.