Life Itself: Goopy, mawkish drama that will leave you in tears for all the wrong reasons

Review: Narrated details fail in a bewildering mess of ideas and shallow characters 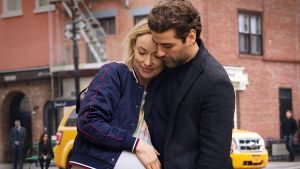 Oscar Isaac and Olivia Wilde in ‘Life Itself’

Dan Fogelman is revered in many quarters as the creator of This is Us, the compellingly weepie American family drama. Unhappily, the prolific writer’s second feature feels like three seasons worth of possible plot points for that long-form drama distilled into a goopy, mawkish two-hours.

An unshapely portmanteau defined by relentless voiceover and melodramatic incident, Life Itself takes admirable yet catastrophic risks in its storytelling. Characters wander in and out of earlier scenes from their own lives, or other people’s lives, adding further commentary to a film that’s already swamped in narration.

What now? This is not even the worst idea in the film.

Maybe she has an excuse. Abbey’s husband Will (Oscar Isaac) relates her tragic childhood: aged seven she was trapped in the same car-crash that killed her parents and her dad was decapitated and then she went to live with her sexually abusive uncle.

None of these breathlessly relayed details make the slightest emotional dent. There’s no time, no space. Because then we make way for an entirely new cast in Spain, where a wealthy landowner (Antonio Banderas) cuts a wholly implausible deal with Sergio Peris-Mencheta and Laia Costa.

No wonder Will and Abbey – remember them? – produce a daughter (Olivia Cooke) who grows up to be morose and troubled.

A final, teary meet-cute moment reminds us of how magic (or at least manipulative) Fogelman can be, but this bewildering mess of ideas and shallow characters squanders a starry cast and our time.

Podcasts for pooches: A brilliant idea – or barking mad?
9