Three Billboards Outside Ebbing, Missouri review: A class act with too many implausible turns 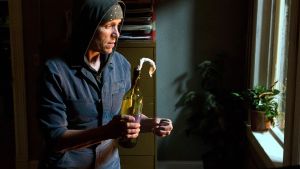 Frances McDormand: what sets her performance apart is her ability to let vulnerability and compassion seep through the cracks. Photograph: Merrick Morton/Twentieth Century Fox

The first third of Martin McDonagh’s latest unromantic comedy is close to perfect. It hangs around a high concept (check the title) that propels all characters into a promising dramatic maelstrom. In a delicious twist, the protagonist and the apparent antagonist prove to be more simpatico than anybody else in their mess-up town. There’s a bit of Black Lives Matter in this corner. There’s some MAGA saga in that corner.

Then, sadly, the threads begin to fray. Three Billboards doesn’t exactly fall apart, but too many implausible turns and uncomfortable gags impede the hitherto smooth machinery.

We begin at a lick with the stony-faced Mildred Hayes (Frances McDormand) stomping into the office of a local advertising firm and negotiating the rental of those billboards. She establishes that the boards can’t say anything obscene, but they can accuse the local police chief of failing to properly investigate the rape and murder of her daughter. In the style of the Burma Shave messages much beloved of Tom Waits, the three billboards read: “Raped while dying”, “And still no arrests?” and “How come, Chief Willoughby?”

Over the following days, we get some sense of the police department’s inadequacies. Officer Jason Dixon (Sam Rockwell), a mummy-hectored, comic-reading dope, has been implicated in the torture of black suspects. Elsewhere in the station, a torpor hangs over day-to-day affairs. Chief Willoughby (Woody Harrelson) turns out, however, to be a decent man. When Mildred and he meet to chew over her provocations, he expresses sympathy for her plight and some understanding for her novel response. McDonagh has constructed an intriguing narrative knot. Mildred’s apparent enemy is the person who understands her best. The chief must, nonetheless, shoulder responsibility for the apparent stasis.

The two actors play it brilliantly. Harrelson remains the mayor of Befuddled Masculinity. Willoughby is firm and competent, but, when nobody is looking, he proves open to the gentler emotions.

McDormand steps up to the challenge of finding undertones in what could have been a one-note performance. She begins the action as a tough-old-broad and that toughness and that broadness rarely falter. Always a gifted comic, McDormand has great fun with the scene in which – for reasons too complex to explain – she pretends, with one side of her face conspicuously paralysed, not to have just left the dentist. The sequence that sees her kick a female teenager where no female teenager should be kicked has already achieved justified renown. But what really sets the performance apart (and could win McDormand the Oscar in a crazily competitive year on the back of a Golden Globe) is her ability to let vulnerability and compassion seep through the cracks.

All well and good. McDonagh, whose film career has lurched from the fine In Bruges to the iffy Seven Psychopaths, has set us on the tracks towards a tantalising Grand Guignol soap. Then the picture takes a second-act swerve that introduces unhealthy surges of sentimentality and narrative contrivance.

When the story begins to stutter, it becomes harder to accept or ignore the author’s more adolescent gags. For the second time in his cinematic career, he introduces a little person (the indomitable Peter Dinklage) and gives him little to do bar endure endless “midget” gags. Mildred’s abuse of her former husband’s much younger girlfriend is funny, but nobody much cares – or indeed notices – that, in this corner of nowhere, Chief Willoughby is married to an Australian more than 20 years his junior (Abbie Cornish). Is that not funny too?

Most damagingly, as the credits loom, one key character changes personality in such absurdly dramatic fashion that McDonagh may as well have recast the role. Nothing so unlikely happened in the town of Twin Peaks.

The picture remains a class act. It is never less than diverting. But it promised to be much more.