Coco: I see dead people, and they are kind, friendly and warm

Review: What might have been complicated is accessible for even the youngest eyes 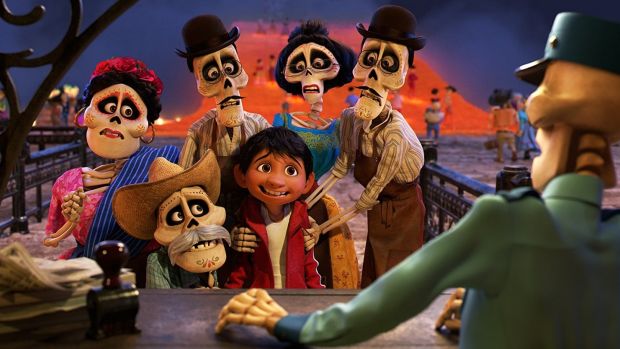 Pre-teen Miguel (Anthony Gonzalez) just wants to play guitar like his idol, the late Mexican superstar Ernesto de la Cruz (Benjamin Bratt). But his strict, shoe-making family has outlawed music, due to the transgressions of a long-dead patriarch. Away from the stern gaze of his grandmother, Miguel has fashioned an altar to his hero, with battered VHS copies of ancient black and white films, and a rough-hewn guitar.

Dia de Muertos, the annual Day of the Dead, will coincide with a talent contest where Miguel hopes to make a splash. After his grandmother lays waste to his handmade instrument, the youngster sneaks into de la Cruz’s crypt to borrow the singer’s iconic skull guitar. Somehow these actions transport Miguel to a different and spookier plane of existence.

Surrounded by kindly deceased relatives, Miguel crosses over into the Land of the Dead, where he strikes a deal with a bedraggled skeleton named Hector (Gael Garcia Bernal). If Hector can take Miguel to de la Cruz, then Miguel can bring Hector’s photograph to the other side, thereby ensuring that his memory lives on.

On paper, the mythology scans as complicated and dark, but in the capable hands of Academy Award winner Lee Unkrich (Finding Nemo, Toy Story 3) and Pixar veteran Adrian Molina, Coco is accessible for even the youngest cinema patrons. Molina, who is of Mexican descent, co-wrote the film’s songs with Frozen duo Kristen Anderson-Lopez and Robert Lopez. It’s an odd thing to hear songs in a Pixar film. For the longest time, a lack of musical numbers was part of the appeal of the House of Mouse’s hipper animation boutique. Happily, the swooning, telenovela-friendly Remember Me and the jaunty Un Poco Loco add to the plot and not just the run time.

The animation eschews the tiring photorealism of Cars 3 and The Good Dinosaur in favour of the transporting carnivalesque, replete with a stageshow by Frieda Kahlo and candy-coloured Xoloitzcuintli. There are some good jokes (casting Cheech Marin as a corrections officer is inspired), a lovely, goofy canine sidekick named Dante, and a big, heartfelt message about the importance of family members, whether living or dead.

The big teary finale isn’t quite the equal of the masterfully manipulative overture of Up, but it is as emotionally wrecking as the last glimpse of Bing Bong in Inside Out. Remember me, indeed.